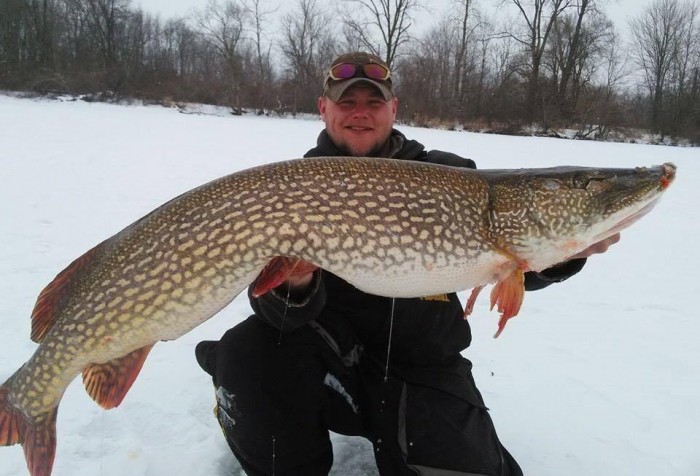 Monster 46-Inch Pike Pulled through the Ice
By angelamontana

Michigan has some big pike, according to a February post on the MIBUCKPOLE Facebook page.  Dusty C is pictured above with an “amazing pike caught in Branch County”, which is located in south central Michigan.   The monster fish was measured at 46 inches long and weighed in at a whopping 25 pounds!  Some suspected the picture of being photoshopped, but Dusty’s friends and fans were eager to put a kibosh on those comments.  Here is an example of one of the responses defending the validity of the photo:

Anyone saying this is photo shopped or fake has clearly not seen the many photos / videos Dusty has posted, this guy’s a Pike slayin machine, nice work Dusty, now all you haters get out there in put the time on the ice Dusty does, and you could too post pictures like this.

It’s always cool to see what anglers are pulling through the ice in other states.  A friend of mine said it best when he said that people need to stop relying on fishing reports from anglers who do all the work by putting time and energy into finding out where the fish are and what they’re biting and get out there themselves to see what they can catch.  When you put the time in yourself, the reward is that much better.  It looks like Dusty can relate to that.  Awesome catch!