Fishing reports coming out of the lakes that now have open water are not only good but in some case the fishing is great. If you have not heard the lake trout fishing on Flathead Lake during the first day of Spring Mack days last Friday probably came close to a record if it wasn’t one. Anglers participating in the derby turned in 1825 lake trout. So fishing on Flathead Lake has been good but you will have to go deep. Call the Mackman, Dick Zimmer-406-250-0241, and he will give all the information on how where and how to fish for lake trout on Flathead Lake. Zimmer also thinks the perch bite in East Polson Bay on Flathead Lake is near, in fact with the warmer temperatures forecast for the weekend it could begin sooner than later.

“My wife Anna and me went over to Hauser Reservoir near Helena on Sunday and had some good success catching trout,” reported Lou Tripp from Frenchtown. “We had luck trolling about 2 miles per hour and caught the trout in about 9-11feet depth so the trout were running near the surface”, he said. Tripp used a combination of lures ranging from a green Needle fish and gold Thomas cyclone, two of his favorite lures. “We also caught a couple on a copper Lindy original spoon including a brown trout that we caught and released”, Tripp said.

Down the Missouri River from Hauser fishing has been good on multi species. “This is the time of the year that you want to try and get up to an area below Hauser dam that they call the Land of the Giants’, Said Trevor Johnson from Kits Tackle who was in Missoula for the Great Rockies Sport Show last weekend. The time window for catching some really big trout is small so now is the time to give it a shot. I would suggest using the boat ramp at the Gates the Mountain and head up river.

If you just want to catch some nice size 17-20 inch trout then Holter Reservoir is also the place to be. The lower campground and log Gulch campground boat ramps are useable and the trout and perch are biting. I went to Holter last Thursday with Michael Jay Nimlos from Missoula. We had some great fishing as we caught close to 30 trout in about 4 hours and then we started to target perch and ended up with 16 fish in about 3 hours. The trout were caught trolling with a j-7 fire tiger rapala, fire tiger syclops, Lindy fire tiger 1/4 ounce viking spoon, a gold body white belly j-7 rapala, a Lindy white green 1/4 ounce viking spoon, and a silver body white belly j-7 rapala.

The perch were caught in 45 feet of water mainly on a white Kits tackle glass minnow 1/8 ounce jig tipped with a night crawler.

Paul Lindsoe from Three Forks was fishing Canyon Ferry on last Sunday and with a fishing partner and his fishing partner reeled in a 33 inch, 15.12 pound walleye. “   It was the first bite of the day, the planer board flag went down and the board lurched back, I grabbed the rod out of the holder and handed it to him”, added Lindsoe, “I could tell it was a huge walleye because I saw it roll just under the surface behind the boat about 50 feet back”.  (See Paul with his walleye below) 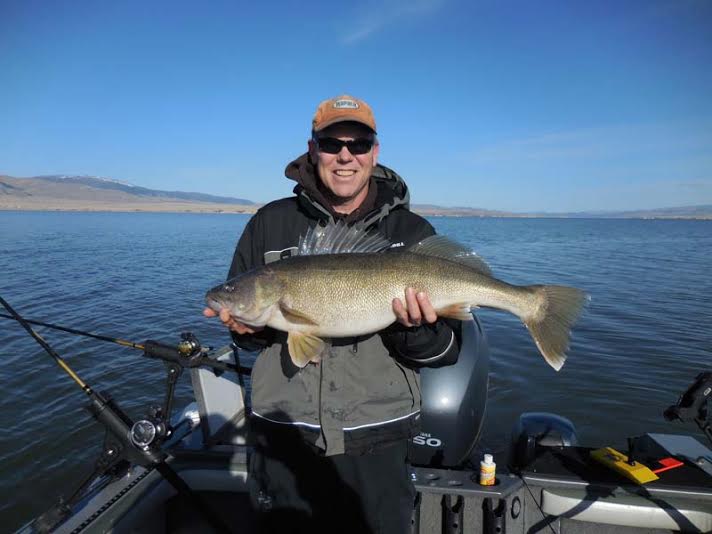