My New Rod! (by Montana Grant)
By angelamontana 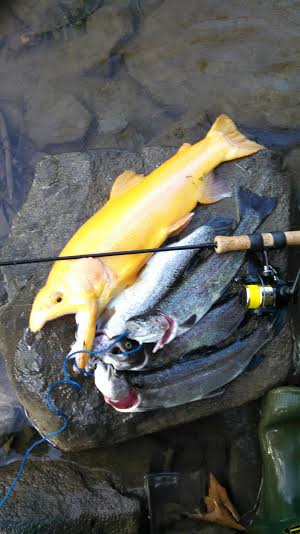 I bought an ultra-lite fishing rod kit in 2001. For whatever reason, I never built it until a month ago. This special rod would have a larger stripper guide and be my new “Trout Wand”! It came out perfectly.

Building rods is a lost art. Rods are so cheap today that you can break one and buy a better another one. Back in the day, you could save a pile of money if you “rolled your own” rod. Custom rods were a wonderful gift. I tended to fish more aggressively knowing that I could always replace my favorite rod.

My new “Trout Wand” went with me on the first week of Maryland trout season. I found that the larger stripper guide worked just as planned. Smoother and further casts with less effort were the norm. My 2 lb. Golden Stren flowed easily off my reel.

The first day I took my new rod for a day of fishing was rewarded with a HUGE 20 inch male Golden trout. These stocked fish are exciting to catch and fight their a- – off. They are a product of West Virginia trout biology and really make for a fun and exciting catch.

On the opening Day of Pennsylvania Trout season, I again took my new rod for a trip. The Yellow Breeches was full of fish but only a few Golden’s or “Paliminos” as the Pennsyltuckians call them. 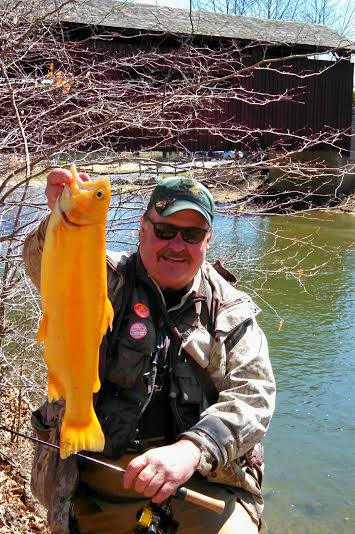 After catching and releasing dozens of trout, I spied another Big Golden. I could not believe he was still around after the throngs of anglers that had targeted him. I carefully approached the monster Golden Trout and cast. Nothing!!! After several more attempts, nothing happened. I suspected that maybe something else was going on and cast to the far side of the trout. He sucked in my bait and the fight was on.

The 20 inch Golden only had 1 eye! He simply could not see the bait and lures that a throng of anglers had thrown at him. The eye was never there and this “Pirate Trout” had a real strong attitude when hooked.

The key to catching BIG fish on light rods and line is a great reel that has a great drag. After a few minutes, the Big Golden slid into the net. It doesn’t get any better. You can see the covered bridge in the photo of my 20 Inch Golden Trout.

Two trips and two Big Goldens! I was nervous to take my rod out for a third trip! A man does what a Man needs t do and my new rod and I went for a third outing! No, I did not catch another monster trout but I did catch a pile of fish along with several nice Goldens!

Oh well, my new Lucky Trout Wand is a real winner! I can’t wait until my next outing!