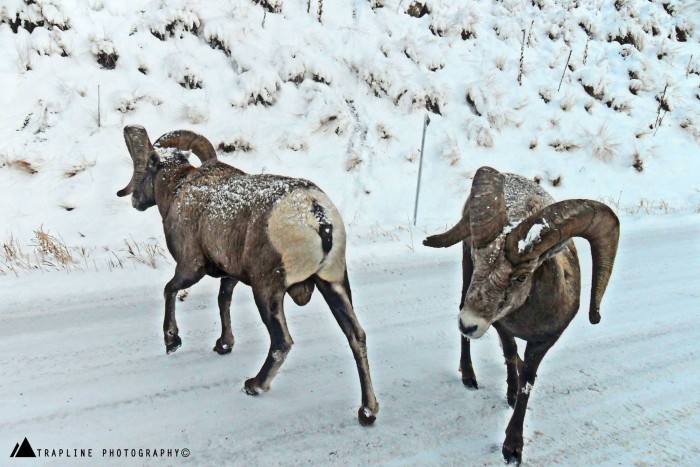 Rod Dietz saw firthand just how cruel nature can be during a recent drive through the Bitterroot valley’s East Fork area:

Bruce Whitehead and I recently were traveling in the East Fork area of the Big Bitterroot River.   We came upon this ¾ curl ram that was resting on the side of the road when I took this picture.   This ram is suffering from pneumonia and was never able to get up from this point in time.   Over the years this disease has killed off many of the Bighorn Mountain Sheep in Montana.

A recent article posted on the Ravalli Republic website revealed that the bighorn sheep herd in the East Fork of the Bitterroot “appears to be suffering a die-off from an outbreak of pneumonia” for the second time in the last six years.

The bacteria-caused pneumonia was verified Saturday by FWP after a concerned citizen (Rod Dietz) called FWP about a sick ram that next to the road (pictured below).  The warden put the ram down and verified its lungs were full of fluid. In an aerial survey done by Rebecca Mowry Monday, they found numerous other animals that were showing signs of pneumonia. 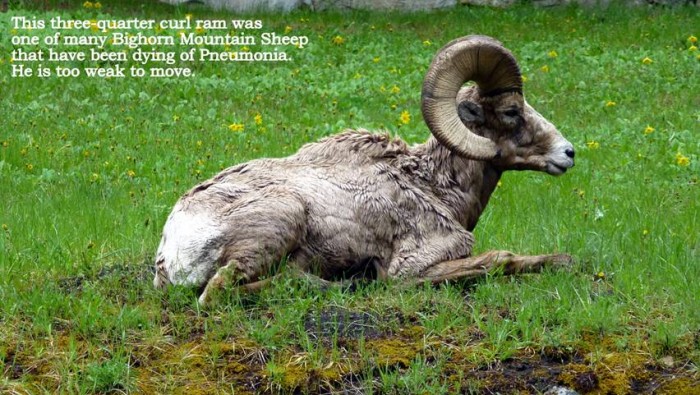 “I surveyed the herd from a helicopter,” she said. “We would push them a little to see if any would start coughing. Somewhere between a fourth and a third of them that we saw started coughing.”

Mowry is determined to keep the sickness away from the nearby Painted Rocks herd in the West Fork, which has been “one of just a few in the state that’s managed to escape a die-off from pneumonia”.

Local residents are urged to help by reporting any sick or newly dead sheep they encounter. The sick ones cough a lot–especially if pushed.

As of now, Mowry will be paying close attention to the lambs and “plans to keep a close eye on the population in the East Fork to see how the illness manifests itself, especially survival of lambs. Sometimes the adult sheep can survive a bout of pneumonia, but they lose their lambs.”

The current quota for bighorn sheep in that area is set at three rams. Mowry said that number may be dropped back to one.