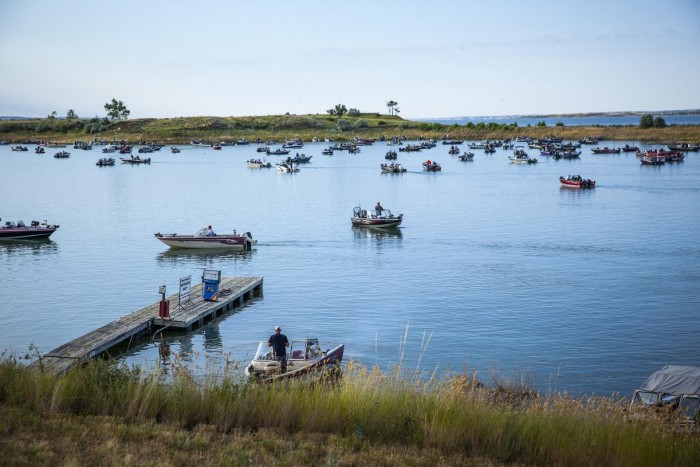 Last Friday and Saturday the 2015 Montana Governors Cup Walleye Tournament took place on Fort Peck Reservoir. The Glasgow Area Chamber of Commerce and agriculture is the force behind Montana’s largest walleye tournament on Montana’s largest lake. They had set a goal of 150 2 person teams this year. By the third week of June they had blew past that mark and hit 200 teams, which is the maximum capacity they are allowed to have according to their Montana Fish Wildlife and Parks permit. “The last time we had 200 teams was over 10 years ago”, said Lisa Olk ‎Executive Director at the chamber .

Last year 142 teams competed. This year 13 states were represented during the 28th annual Gov Cup, “I don’t know if that is a record but it might be close”, she said. The reputation that Fort Peck Reservoir has earned as being one of the top walleye lakes in the country is the main reason for the sold out field, the lower price of fuel also might have been a contributing factor too. “The economy in Northeastern Montana is very good”, said Real estate agent Jarrell Schock from Missouri River Realty, “there is a lot of cash in this area because oil and agriculture and everything seems to be feeding off of each other”.

With a sold out field comes big payouts. The winning team would take home $15,000. I spoke with a number of anglers before the tournament and many were optimistic about their chances as their pre fishing days leading up to the tournament had gone very well. But as many tournament anglers have discovered in the past the fish they caught before the tournament don’t always show up when it counts. The bite at this year’s tourney was tough. Even though only 7 teams zeroed during the two days with no weighable fish the weights were low for the most part with very few big walleyes and teams struggled to put two good days together.

At the end of the tournament with anglers from all over the U.S. a team from the small town of Fort Peck Montana ended up with a bunch of cash in their tackle box. Sam Lawson and Clay Kittleson caught 14.02 pounds the first day and finish the second day with 20.5 pounds for an overall weight of 34.52 pounds. They edged out Luke Sundby and Eli Williams from Williston North Dakota who had 32.66 pounds.

Putting on a tournament with that many participants has many challenges but the Glasgow area Chamber of commerce is helped by some 200 volunteers. It was impressive to see them launch 200 boats at the Fort Peck Marina and get them all in the water by 6:30am for a 7am start, a process that began at 5am. “We have many folks to thank”, said Todd Young the tournament co-chair, “the volunteers, sponsors, and of course the fisherman”. The big payouts weren’t just for the fisherman as local businesses were poised to catch part of the $235,000 that was spent by the anglers during their stay.

It was a welcome boost for Gene More owner of the Lakeridge Motel and Tackle Shop to go with an already busy summer season, “We sold thousands of gallons of fuel and dozens and dozens of night crawlers and leeches”. Oil and agricultural have certainly played a big part in boosting the economy in the Fort Peck-Glasgow area but this past week during the Montana Gov Cup it was fishing for walleye that netted the most money for anglers and retailers.