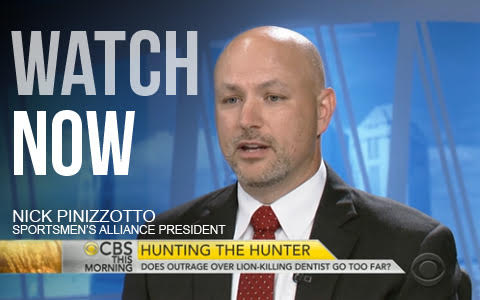 Nick Pinizzotto, US Sportsmen’s Alliance President and CEO recently appeared on CBS This Morning to “initiate conversation revolving around sportsmen and the perpetual attacks against our outdoor heritage.”  Here is a recent press release from USSA involving recent attacks:

As many of you well know, hunters as a whole have been thrown under the bus due to the killing of Cecil the Lion. While the information surrounding the hunt is still unclear, one thing is for certain – sportsmen everywhere increasingly find themselves under the microscope of public scrutiny.

Sportsmen’s Alliance has stepped up to the plate and is working around the clock with writers, television producers and other media professionals to educate the public on the many beneficial roles sportsmen play as conservationists both here in the U.S. and abroad. Earlier this morning, Sportsmen’s Alliance President & CEO Nick Pinizzotto appeared on CBS This Morning to initiate the conversation revolving around sportsmen and the perpetual attacks against our outdoor heritage.

I would greatly appreciate your help in spreading the news surrounding the steps Sportsmen’s Alliance is taking to defend our hunting heritage. Attached you will find an image of Nick speaking on CBS The Morning, which you are free to share on social media with either of the suggested copy:

Thank you for taking the time out of your busy schedules to help the Sportsmen’s Alliance advocate for and defend our hunting heritage. If you have any questions, or would like assistance crafting a message around this issue, feel free to contact me directly or email Brian Lynn at blynn@ussportsmen.org.