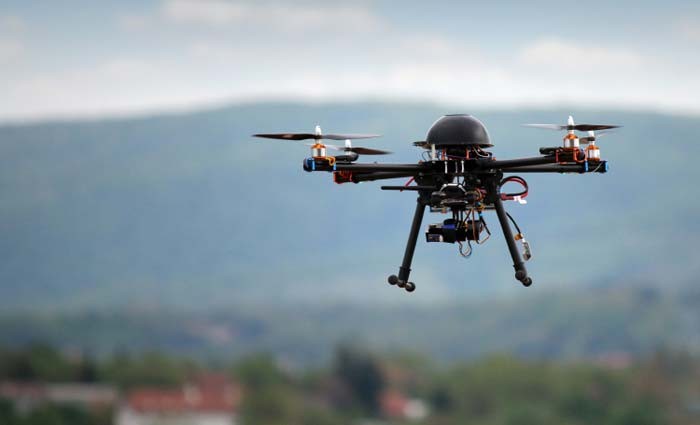 Drones, or light quad-copters, are one of the best-selling new gadgets on the market, and were among the top new Christmas gifts given in 2014. Stories about drones are hitting the news daily in both positive and negative light. While a great product idea, unfortunately, drones have a tremendous potential for misuse and these misuses have been happening more and more frequently. With the ability to carry on board cameras, drones have been and are being used for spying on unsuspecting neighbors and others without their permission. With little regulation surrounding drone use, there is much confusion about what a person may do to defend against drone threats.

Recently, a gentleman shot down a drone that was spying on his daughter sunbathing near their pool in the backyard. There is an ongoing investigation as to whether it was a legal area to discharge a short range firearm. With this in mind, it is imperative the laws of proper firearm use are followed when using this product.

In addition to privacy concerns, drones can endanger people with weapons or explosives mounted to them. Recently a man announced and demonstrated in a YouTube video how he had mounted a GLOCK pistol to a drone and devised a system that allowed him to remotely fire it. Drones have also been documented flying dangerously close to commercial aircraft, and the threat is becoming more and more real for them to be used for acts of terrorism.

Drone Munition was created to provide defense against the danger caused when drones are misused. Drone Munition is lead free, safe for the environment and provides a very high quality load that will effectively disable a drone encroaching your property’s airspace. As a side note, the round also makes for a very high end hunting load for ducks, geese or turkeys.

Our friends at Lucky Gunner will be carrying the Drone Munition loads in both 2 shot and BB. Ammo can be purchased by visiting www.luckygunner.com. Several distributors including Axelson Tactical and Texas Ammo Group will be carrying Drone Munition. Dealers can reach out to these distributors or directly to our office to track down this great new product. SRSP will also be offering a line of merchandise to include T-shirts, targets and hats featuring the Drone Munition brand.

SRSP, who already manufactures Lone Survivor Marcus Luttrell’s Team Never Quit ammunition line, sees the Drone Munition line as a fantastic compliment to its products. “We are very excited to be manufacturing a product focused on defending our freedoms. We see this line as a game changer in the industry and as an important defense against rising threats to our way of life,” stated Casey Betzold, president of Snake River Shooting Products.