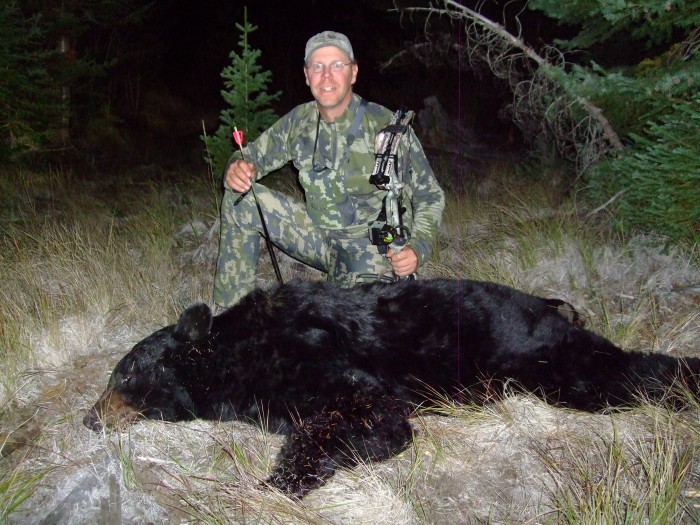 Bow hunting the Yaak in a tree stand, at the very end of the day.
He heard this bear wandering around to his left, and it spent 15 minutes wandering around the tree he was in, between the tree stand ladder and the tree, and around the back and sides, giving no possible shot.  He started around to the front of the tree (shooting range), when there was a lot of racket in the woods behind him.  Tim thinks it was another bear.  This bear stood at attention for several minutes listening to the noise, and as whatever is was wandered away, he relaxed and walked from left to right at 15 yards in front of the tree.  First arrow perfectly placed (goes through him).  Bear never flinches, turns around and walks from right to left in the same line.  Second arrow again, perfect. Again, goes through him.  He turned, Tim fired one more arrow that again, hit well.  The bear walked about a hundred feet and piled up.
Big bear.  He skinned it, removed the fat, boned out the meat, and got everything into coolers for the trip home.  FWP in Thompson Falls commented that it was extremely large, as did the taxidermist.  We weighed the fat, hide, and meat (including leg bones) at 450 lbs.  Don’t know exactly what that equates to if you added the rest of the skeleton and the internal organs, but…he’s a big guy!