Test Your Reflexes (with Colonel Smoothbore)
By angelamontana 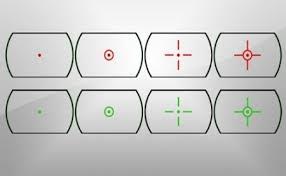 Reflector, or as they are more commonly known, reflex or red dot sights give shooters a great option for almost any shooting situation. Hunters, action pistol, 3 gun, and even some shotgunners find reflex sights quick to acquire and easy to use, and they are extremely useful in CQB, CQC (close quarters battle, close quarters combat) encounters.

Reflex sights are usually found in two forms; the open, wedge like design, and tubular design that looks like a Martian used a ray gun to shrink a regular sized scope. There are others that appear to be a hybrid of both designs.

Reflex sights are usually battery powered, although fiber optic and tritium illumination are options, with the latter being somewhat expensive. Prices range from less than $100.00 to thousands depending on features and quality. I have used several different brands and overall my experience with them has been positive if I us

e them on the firearms they were designed for. I wouldn’t suggest putting a 40 dollar red dot that was designed for a rimfire on a .416 Rigby.

Reflex sights can be had with an almost unlimited number of reticles, dots, circles, chevrons or triangles, and various forms of crosshairs are just a few of the options available. I have a fairly inexpensive Truglo® sight that has both red and green colors with single dots, and circles with a center dot. In addition, the intensity of the reticles is easily adjusted with a rheostat. I use this on a .22 rimfire target pistol for bullseye competitions and this combination with my old eyes puts me on more equal footing with the youngsters.

Reflex sights offer shooters the ability to quickly acquire a sight picture and very few have any magnification, so two eyed shoo 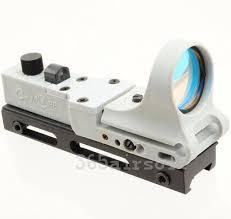 ting is much easier than with conventional iron sights or multiple magnifications scopes. Just put the dot on the target and press the trigger.

If your fundamentals are sound, you’ll be successful. It’s my opinion that reflex sights are by far the easiest sight of all to use and as I stated earlier, they are the optimum choice for CQB.

While I haven’t used a red dot on a shotgun, many turkey hunters wouldn’t think of using anything else. I have seen a few competitive trap shooters use them and they appeared to be fairly successful. Many new models are extremely small and rugged and are becoming more common on handguns, especially semi- 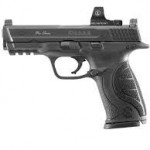 autos. S&W® has an M&P® that the slide has been specifically designed for a reflex sight such as the Leopold® Delta Point and others. These units weigh only about 2 ounces and can really aid in rapid, accurate fire. These units are capable of very good accuracy; for instance the Delta Point has 50 MOA a

djustment for both windage and elevation.

If like me, your eyes are aged and iron sights are no longer much more than a blur on the horizon, try a reflex sight. I’m sure your marksmanship will see great improvement. There’s a reflex-red dot for just about every application and every pocketbook.