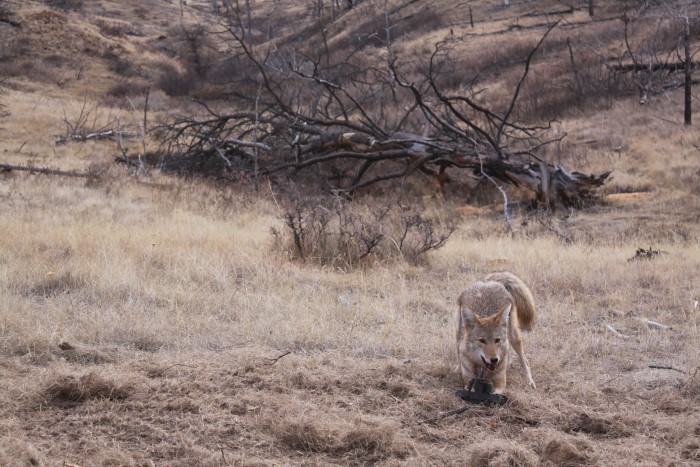 The Grab And Go Set For More Coyotes
By Toby Trigger

Getting trap shy coyotes and fox to commit to stepping on the pan of a foot hold trap can be a difficult task for trappers. Seeing tracks approaching a set and stepping within a few feet or inches of your trap can be enough to make you question your lure, human scent or any number of other variables. But it might just be that their curiosity was satisfied before they made it to the trap.

Many long liners put up good numbers of canines, particularly fox with dirt-hole sets but coyote trappers using foothold sets and putting up big numbers are likely using a combination of sets and taking full advantage of coyote’s olfactory and visual senses. While dirt-hole sets and traditional flat sets work well they may also fall short in keeping the attention of coyotes long enough to get them to work the set. Using a variety of sets is the key to taking the most coyotes in a given area and one set I’ve found that keeps coyotes interest up all the way to the set is a set I call the “grab and go”.

This flat set variation was first taught to me by a long time western trapper named Denny and I must give credit where it’s due. This set is very fast to make and won’t draw unwanted attention from other people. The theory behind the effectiveness of this set can be best illustrated by watching domestic dog behavior. When a domestic dog sees something that perks his curiosity like a bone on the ground or a dirty sock, he may nervously walk up to it and sniff it a few times before grabbing it in his teeth. He will then quickly walk about 10 feet or so before laying down and chewing on it. If another dog approaches he’ll likely pick up his prize and run away in an effort to safeguard his find. Canines do this because they want to protect their possession and ward off any threats from other canines stealing it. It’s instinct for them to grab it and go.

Big bait stations can attract coyotes but they will often circle the area many times and even then may not commit. Coyotes wary about other coyotes or those with a developed sense to stay away from such set locations do not want to be standing at a mule carcass when the alpha male shows up. A little morsel laying on the ground just off the beaten path may be more appealing for coyotes’ that are unwilling to approach such a bait station or big dirt hole set.

Coyotes are attracted to different lures throughout the season and recently dispersed sub-adults moving through an area may be more trap-shy than a resident or vice versa. Either way, trap shy coyotes are likely to shy away from big dirt hole sets and using scent posts with coyote urine may cause a fox to high tail it out of the area. Using the right lure at the right time is a key factor in getting any canine to approach a set. When tracks reveal that a big dog came in close, circled and left there is a lot to be learned by the trapper. Most importantly, the lure did its job. The scent was interesting enough to draw the animal closer, but not seeing anything of interest or a resistance to dirt holes may have caused the animal to lose interest. But the lure worked, it was the set construction that failed to draw that particular coyote in. When this happens, something needs to change about the set so that the next time a coyote checks out the set, he keeps coming – all the way to the trap.

Set construction begins in your fur shed with a durable morsel like a front foot from a beaver, raccoon or fox. Start by driving a nail through the foot to create an easy pathway for thin galvanized or stainless steel wire cut to about 6 inches in length. Push the wire through the hole and twist the wire to fasten it securely. Attach the other end of the wire to a big spike, fence staple or some other staking device.   After making several of these place them in a clean plastic bag to bring along on your trapline. 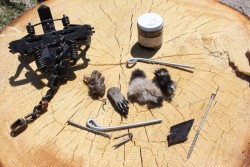 The tools and materials you’ll need to make the Grab and Go set.

Location for this set should be like any other location for canines; upwind of their travel routes. The backing for this set can be quite small like a clump of grass or a rock about 8 inches in diameter. Scrape off any litter from the ground above where the trap bed will be and save it aside for blending the set in later. Dig the trap bed to accommodate the trap pan about 8 inches from the backing and bed the trap solidly. I always use waxed dirt regardless of the season because the ground can freeze in my part of the country in early October particularly at elevations exceeding 6,000 feet. I also prefer a number 3 coil spring trap with offset, laminated jaws and four coils for speed and holding power. Once the trap is bedded solidly in place, sift dirt as normal and blend the set in with a slight depression over the trap pan making sure the trap location looks as it did when you started.

With a conventional flat set, a tea spoon of curiosity or gland lure rubbed on the backing would complete the set. For this set to really work and bring the coyotes all the way to the trap, drive the spike into the ground just in front of the backing and tuck the visual attractor in so it is visible for the approaching coyote. This set should create a subtle appeal. The idea is to make it look natural. There’s no big hole and no noticeable disturbance on the ground. But it appears as though another canine was here and left something of interest behind. One or two lures placed on the backing will bring the coyote in for a closer look and when it sees the visual attractor, the instinct to grab it and take it else ware will bring it in the rest of the way. The spike holds the visual attractor in place forcing the coyote to work for it a little longer, spending a few more seconds at the set. The longer he’s there pulling on that attractor, the better your chances are of it stepping onto the pan of your trap. 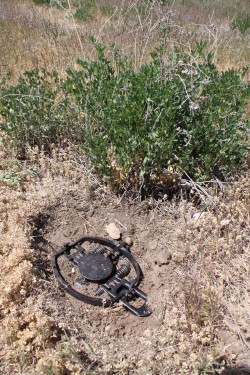 Proper Trap Placement in relation to the lure.

This set may be used with a piece of fur, a partially buried beaver tail or any other durable visual attractant. This set can also be effective for wolves and will work all winter provided that the set locations are protected from deep snow. A good call lure in late winter with an attractor wired to a fence staple driven into the base of a stump can have the same effect. As the season progresses the types of lures you’re using should change but the visual effect of a unique attractant remains the same. 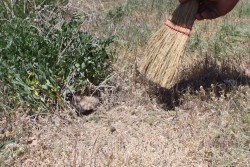 Use a brush for the final touches on the Grab and Go set.

The grab and go set is a great addition to any trappers’ tool box because it is easy to make, takes less time than making a big dirt hole set and won’t draw unwanted attention.  Try incorporating the grab and go set on your trapline this season and you’ll be able to pull those wary coyotes in the last few inches and put more fur on your stretchers.