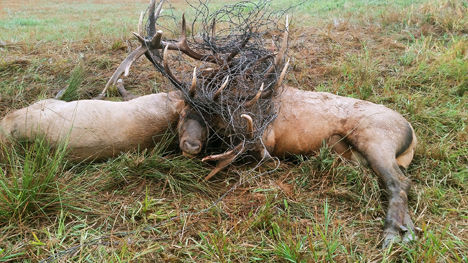 Sad news for a couple of bull elk last weekend.  Here’s the article via cdapress.com:

Two bull elk died after a bloody fight in which both were gored multiple times, their antlers got locked and they ended up tangled in a barbed wire property fence.

One died from injuries sustained in the struggle, including a possible broken neck, and the larger one was in such bad shape it had to be put down by a property owner.

“People from Coeur d’Alene come out here all the time to view the elk,” Lenz said Monday. “We generally in the morning have anywhere between 40 and 80 head, and then again in the afternoon at certain times of the year.”

Lenz said the barbed wire was stripped off a quarter mile of her fence and wrapped around the antlers.

“They just barrel-rolled like gators do,” during the fight, she said. “They literally took our fence down.”

She said bulls in the area were just starting to put together their herd of cows.

Lenz and her husband, Joe, harvest elk on their property.

“We’ve watched him out here for a few years,” Lenz said. “He was really standoffish and skittish.”

The other bull, a six-by-six, was 7 or 8 years old and had passed his prime, she said.

Joe Lenz and a neighbor helped process the elk. Idaho Department of Fish and Game officers took the meat, which will go to a food bank. Fish and Game took the antlers to be auctioned.