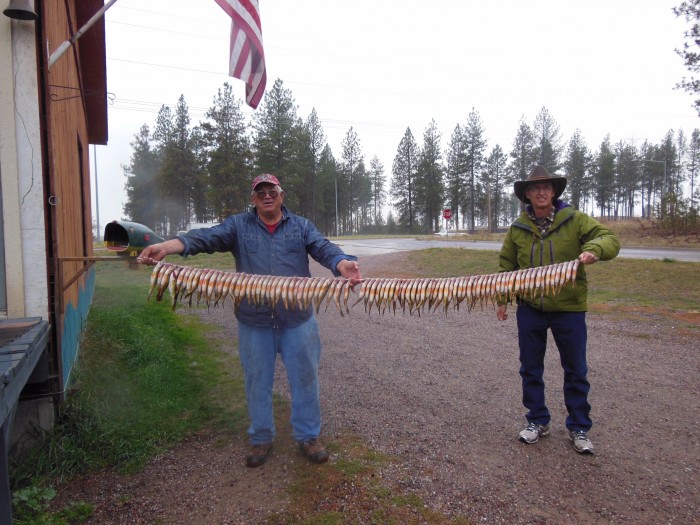 Fishermen:
In my 68 years on planet earth I’ve never had an awareness of how good fishing could be in Polson Bay.  A summer combination of high temperatures, more weed growth, knowledge of where the fish are and a spike in the new burgeoning population of small mouth bass added together equaled spectacular fishing.  From my boat alone we harvested hundreds of perch probable y20 limits of smalleys.  As recently as last Monday, October 26th, Marlon Starblanket and I brought home 60 fillet sized perch one of which was a jumbo 12 incher.  (See picture)
Because of rapidly dropping surface temperatures the change from summer to fall and early winter fishing is in progress.  The small mouth slowed appreciatively when water temps dropped below 60 degrees.  As of Monday the surface temperature was 52 degrees.  As the perch and other warm water species become less active the Lake Whitefish and lake trout responding to the higher oxygen content in cooler water will become active.  The Whitefish are already concentrated around the Armed Forces Memorial Bridge.  The early spawning Lake Trout looking to replenish depleted bodies after the rigors of the spawn are also moving into Polson Bay to take advantage of the abundance of forage there.
I prefer fishing there at night because the aquatic activity under the street lights and the ability for the fish to see and therefore feed I enhanced.  I’ve had best success over the years using a setup of two green flies baited with maggots above a bottom weight.  Elevated current speeds require at least a ¼ oz. bottom weight if fishing from a boat or at least a ½ oz. weight if fishing from the bridge.  Changing you bait often to maintain a fresh larva smell is also a plus.
I’ve witnessed fishermen using sinking fly line with caddis and mayfly larva imitations having good success from the shore at the West end of the bridge.
The Lake Trout population though lower is holding its own.  Their numbers being brought down is allowing other species to do well most notable the small mouth bass and perch.  Another species considered the second most popular game fish in the continental United States, the black Crappie has shown up in large numbers at the North end of Flathead Lake and is on its way south.  For those of you not familiar with this fish it is in the sunfish family of which small mouth and largemouth bass are the largest.  Weight wise they can be larger than perch.  They do well in weedy areas and in deep rocky holes all of which there is an abundance of at the South end of Flathead Lake.  It may take a few years but get ready for another great shoreline fishery in the lake.
The technique for catching lake trout has made a complete circle.  We’ve been having best success actively popping a jig with or without bait.  We used this method 25 years ago and evolved into fishing lower as the years progressed.  Now the old approach is working again.  A 1 oz. green Chartreuse glow Rattle D Zastor with a size 6 red treble hook, a glow 1 oz.  Trilobite or a ¾ oz. or 1 ½ oz. Leadagator in the glow or glow and green chartreuse colors are all working especially in the shallower water.  (40 to 170 ft. depth).  Many fishermen are also finding deeper waters (200 to 250 depth) are still productive using a Glow Grub with a flat jig between them.  These baited with cutbait or night crawler.
A phenomenon that we haven’t seen in 8 or 9 years is a growing perch population in Flathead Lake proper.  This sparks the lake Whitefish bite in mid-summer but also spawned out lake trout have a tendency to stay close to the shore to feed on perch rather than return to deep water to feed on shrimp.  This opens the door for shallow water trolling (25 to 35 feet).  Very little weight is needed under these conditions.  Often a heavy spoon or spinner is enough weight.
Normal trolling techniques using down riggers, Dipsy Divers, leaded line, and steel line have all been producing fish.  Kamlooper spoons and Vibrax spinners are two of the most often used lures.
For more information call us at 406-675-0068, fax to: 406-675-0066.  My personal cell is 406-250-0241.
Email us at:  macman@ronan.net      For most of our product line go to:  www.zimmertackle.com
Good fishing
The Macman