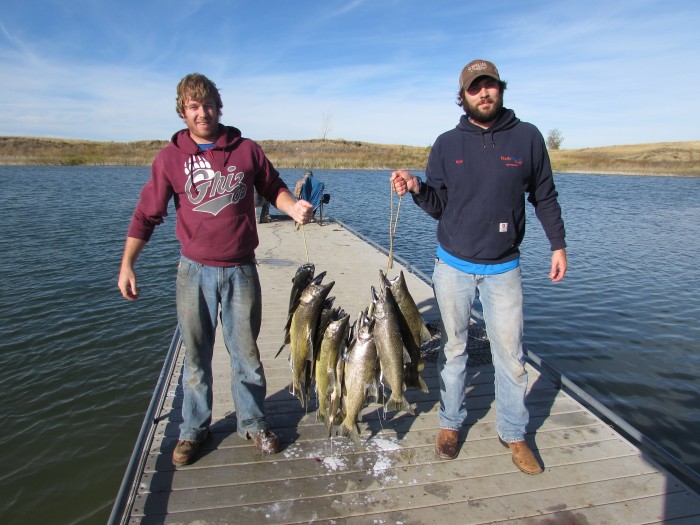 Woody and his crew headed to Fort Peck last week in search of King Salmon.  Read the report by Woody’s Lures below.

We got back last Saturday from an awesome week of fishing the Northeastern area of FT. Peck. What a versatile area! Took 4 buddies Jim Bird retired FWP Warden, Steve Speicher Semi-retired & Farmer, Glenn Van Zee Retired Biz owner & Kevin Gates Retired Deputy. Our main objective was to snag the Chinook (King) Salmon that return to spawn this time of year.

FWP started stocking Chinook salmon into Fort Peck Reservoir in 1983. They were introduced to offer a unique angling opportunity and to utilize the cold water habitat, as well as to feed on a growing population of cisco — also known as lake herring — that inhabit the reservoir.  Currently, this is the only Chinook population in Montana.

Fort Peck anglers typically start targeting salmon by using downrigger gear the latter part of summer. That’s when the reservoir’s temperature layering, known as a thermocline, usually becomes established. Heavy lead cannonballs are needed to get down to the depths where the salmon are found, and anglers pull large flashers and plastic squids to entice them to bite.

Salmon spawning activity will typically commence with vigor in the first part of October, when water temperatures start dropping below 60 degrees.  During this time, mature salmon will move further into the shallower, shoreline areas and attempt to spawn.

The movement of salmon into shallow water triggers biologists to begin the annual collection of mature salmon using electro-fishing gear and trap nets.  This salmon fishery is totally reliant on the efforts of Fort Peck’s FWP reservoir crew and hatchery to propagate.  Without these efforts, there would be no Chinook salmon fishing due to the absence of spawning habitat.  Salmon need rivers and streams with clean gravel beds to successfully spawn and complete their life cycle.

Chinook salmon typically live four to five years before they spawn and die.

The eggs collected from Fort Peck Reservoir are the only disease-free Chinook salmon eggs in the Lower 48 states, with the exception of the other mainstream Missouri River reservoirs in North Dakota and South Dakota.

Anyway I’ve done this in the past, but none of the other guys have experienced this. Boy were they in for a trip. First according to the FWP this is turning into one of the best years they’ve had in a long time. These fish have been eating like Fat Albert at a Cup cake bake off, just plain fat and healthy fish. We started fishing at the FT. Peck Marina and the folks there were great letting us fish off the docks. At the marina if was kind of slow but we did pick up a few fish and these babies were nice. Ranging from about 8 to 12 lbs. (All males).

A day later we talked with the FWP Electro-fishing crew and got a few tips. They also stated that they too were only getting mostly males, for the whole morning work they only had two females. We were told that the spawn really was just getting going and the ladies hadn’t made it in yet.

Later we made it over to the Duck Creek area and that’s when things really kicked into gear. It was about as good as the marina, but the fish just really started moving in. These mostly seemed to be smaller male, but there was a few big boys mixed in. Of the bigger fish snagged they were between 12 to 14 lbs. with one over 16 (See the pic).

All the fish we and others caught in 5 days’ time were all males except two. Lots of 5 to 8 lb. fish towards the last part of the trip. We did put a little time for other fish and did fairly well with smallmouth and Pike. I also took a 20 gauge for upland birds, but never took it out. That’s not to say there’s no birds. There’s plenty Huns, pheasant, sharp-tails and tons of waterfowl.

If you ever get the chance to try this out, go for it! Important things to remember are the gear and tackle. There were lots of folks out with small or light weight spinning reels and rods. These will work, but note as well as proper gear.  These are very powerful fish, with tough hide. You’d get the idea real quick when you hook one in the tail. Your Paddlefish rod isn’t too big and anyone with a surf fishing rig is right at home here. We used 20 to 30 lb. test mono, because mono will stretch enough to absorb the shock of hitting a fish. The rods can be Fiberglass or Graphite. Fiber gives enough also, but you have less swing in the snag due to the limberness. Graphite has enough back bone to put a serious swing in the snag.

Next and the most important is the snag hook. All sizes work, but bigger is better. Also use Straight point not curved. Curved has the point actually pointing inward to the shaft, thus less direct penetration. Always keep a hook sharpener or small fine metal file handy. The hooks are sharp out of the box, but not enough. I use a diamond angle on my points and what a difference. We saw lots of folks lose fish because the hook wasn’t pre-sharpened. Turn around with a sharpened hook and was like night and day.

Anyway we had a blast, caught and kept lots of fish. These fish are going to die and the only spawning will be what the FWP produces.

Have fun and we’ll see ya later.

“In business since 1993 making lures for fish, not fisherman!”

Check out these pictures from last week