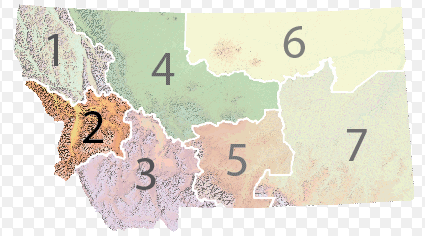 Deer, Elk Harvest up in West-Central Montana
By rowdyrob

Headed into the final week of the season, big game harvest is ahead of last year’s pace in west-central Montana.  The combined harvest of elk, mule deer and white-tailed deer through the region’s three hunter check stations is 17 percent higher than at this point last year.

Combined elk harvest at the region’s three hunter check stations is at 294, compared to 211 last year, and the white-tailed deer total is at 436, up from 398 last year. While mule deer harvest has lagged all season long, it is now at 104, on par with last season’s 103.

The Bonner hunter check station sees most of the white-tailed deer harvest, where the total of 345 whitetails is higher than any season since 2008.

At the Darby station, the harvest of 198 elk is up from 136 at this point last season but down 15 percent from the five-year average.    The Anaconda check station has seen 50 elk this season, compared to 36 last year.

FWP has also operated a check station for three out of the last four years at the mouth of Fish Creek, west of Missoula, where biologists and student volunteers have checked 56 white-tailed deer and 23 mule deer so far this season and no elk yet. 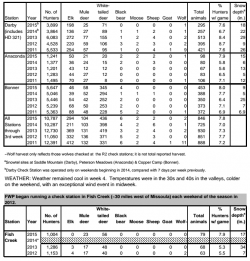