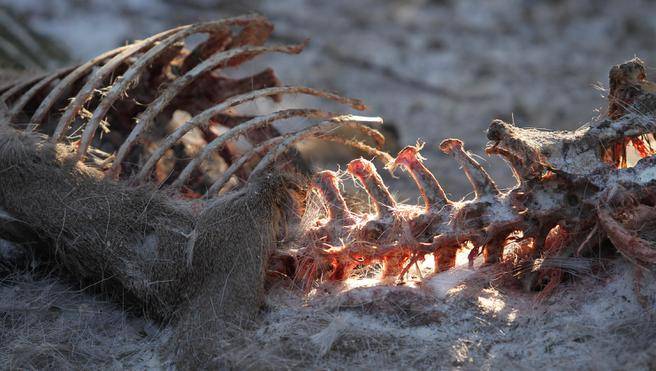 Dispose of that Carcass Legally!
By angelamontana

A frequent complaint to Fish, Wildlife and Parks this time of year centers on carcasses dumped after someone has removed the venison.

“State law dictates that inedible portions of lawfully taken game must be disposed of in the garbage or taken to a refuse facility,” Andersen says. “Also, state law prohibits successful hunters, and those receiving game as a gift, from wasting meat that is suitable for food.”

Edible portions suitable for food are defined as all four quarters and the loins. Once an animal is taken home from the field and edible portions removed, all hides, rib cages, legs and other parts need to be placed in the garbage or taken to the dump. Otherwise it’s littering and there are criminal penalties for littering.

A person convicted of littering while hunting or fishing faces a mandatory one-year loss of privileges.

Although it is okay to leave scraps in the field at a kill site, Andersen says, once the animal is transported from the field, a person cannot then dump the animal scraps.

“I commonly find animal carcasses and scraps dumped on state land, federal land, along highways, and along county roads,” Andersen says. “Understandably, residents in such areas become upset and angry, often calling to complain. Of course, landowners can dump on their private property, and give others permission to do so.”