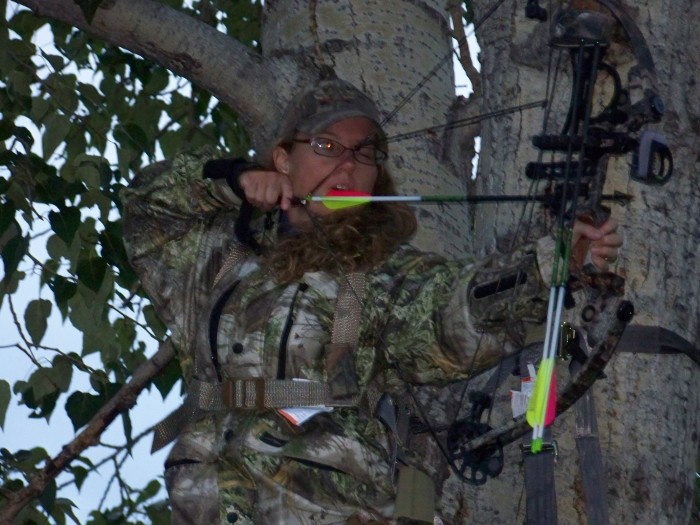 Jen “The Archer Cordaro” shares her thoughts on women hunters and the challenges they face:

Females get a certain amount of attention in the hunting community that our male counterparts typically don’t. Some of this attention is positive and some not. What strikes me as interesting is the attention females get from within our own community, not the attention from the anti-hunters. While I’m not going to speak to every type of attention that female hunters get (or even sometimes seek out), I do want to talk about a few things that females face that often go unaddressed. Take the following as a public service announcement filled with some level of sarcasm and comedy, but which is written in all seriousness. The information is coming from my own experiences and conversations that I have had with many female hunters.

I’m often asked to speak at events, and typically the topic is women hunters. When I ask for clarification and definitive discussion points, the usual response is something like: “Well, you know, talk to women about whatever they need to know about hunting.”

Though I almost always accept these events, I find it hard to not respond with: “Women and men need the same information to learn to hunt—the skill set is the same regardless of gender.” And that’s the truth. There really is very little information that anyone can present to an audience of females who wish to hunt that would be different from an audience of males who want to learn to hunt.

After thinking more about this, I have come to the realization that this request is filled with good intentions and really comes from our community wanting to support women who are interested in hunting. In my case, it also positions women to receive that support and information from another woman – something that can be less intimidating and more inviting. I get that. What doesn’t make sense is the belief that the information I will present will apply only to females.

There are a few differences between men and women, like size, fit and temperature rating of clothing and equipment. However, the biggest difference might just be something as mundane, but vitally important, as answering nature’s call. Ladies, when it comes to popping a squat, check out the GoGirl or the SheWee.

The actual skill set, however, for hunting doesn’t change. I recommend that anyone looking for some direction on how to become a hunter check out: So You Want to Become a Hunter: 10 Basic Steps to Get You Started.

As a lady, I appreciate the support from the guys and I would imagine that most women do. After all, many women learn everything they know about hunting from men, and if it weren’t for them, many women would not be involved in the outdoors.

However, here is something that many ladies face that may raise some discussion. By no means does this apply as a blanket statement towards all men. But, as a female, it is true, even if we don’t talk about it, that some of the guys who offer to take us into the field have rules we must abide by. Some of the unspoken rules ladies have to follow when hunting with certain guys include:

….than the guy who is helping you.

Ladies, with that…if you experience any of this, I encourage you to speak up or find a new guy to help you. As an outdoorswoman, you should always feel valued because you are part of the outdoor heritage and you are important to the continuation of our legacy.

There are more men than not, who don’t feel the need to prove anything and who are genuinely there to help and promote new hunters in the outdoors. In my own experience, there have been more men who are supportive and enjoy playing the role of mentor, guide and teacher. For that, I am incredibly thankful. However, I know many ladies have not had positive experiences and as such, have refused to try hunting again.

Guys, if you ever witness another guy being threatened or intimidated by a lady hunter, please be an ally to them and say something. Both genders are incredibly important to the continuation of hunting, fishing and trapping. We need to support one another, teach one another and stand together as a community who will defend our heritage.