Fishing Talk with the Captain: Captain’s Column 1.21.16
By angelamontana 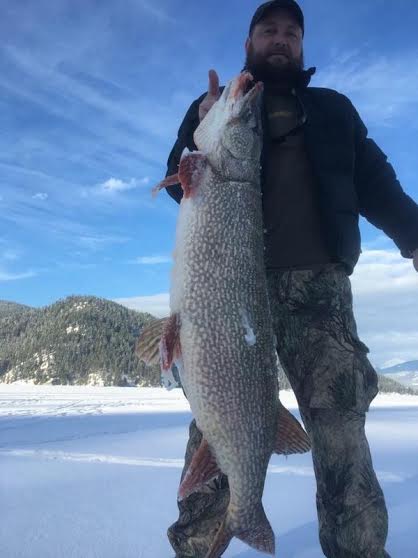 A couple of weeks ago Jim Johnson and Denny Peterson from Lincoln decided to head to Holter Reservoir and try their hand at catching perch through the ice. The ice at the time was just starting to get thick enough to walk on, as it was only 2 inches in some places. They were one of the first to test the ice on Holter and it proved to be a good trip. “We caught our limit of 10-12 inch perch”, reported Johnson in a text that included a picture of a sled that is normally used to haul ice fishing gear half full of perch.

Perch in Holter are plentiful and have been for a couple of years. So much so that Montana Fish Wildlife and Parks raised the limit from 25 per day to 50 per day last year. The tasty table fare fish travel in schools in Holter and can be caught in depths jigging that range from 20 feet to as deep as 50 feet. The key is to find a school of perch and start jigging.

With open water you can imagine it is easier to locate a school of perch while moving around in a boat, as compared to ice fishing when anglers sometimes have to drill hole after hole in search of the schools of perch. “We drilled 50 to 60 holes through the ice before we got on top of them,” said Scott Arnold from the Bitterroot Valley. Arnold and his fishing buddy began fishing on last Saturday and finally got over the perch on Sunday.

Since Johnson and Peterson’s successful trip a couple of weeks ago the word has gotten out. “The next time we went about a week later there must have been nearly 100 anglers on the ice around Log Gulch and Split Rock”, added Johnson, “We began fishing in the same spot as before but didn’t have any luck so we moved to a different area and finally found some fish”. Most anglers are having the best luck jigging with a jig tipped with maggots or a piece of worm in 10 to 40 feet of water.

Pablo Reservoir is now open to ice fishing and reports are coming in that the perch fishing is fair. Reports out of Lake Mary Ronan say the ice is still not safe in some places. Anglers have been catching some kokanee salmon in the evening but use caution while moving around the lake.

Reports are coming in that some large northern pike being caught around the state.  I did receive one photo of a pike that was caught recently out of Noxon Reservoir by Nathan Snead. After he landed the monster, Snead thought it might be a new Montana state record, but after weighing the fish on a certified scale, it came up short at 34.6 pounds.  The current Montana state record pike is 37.5 pounds and was caught by Lance Moyer out of Tongue River Reservoir in southeastern Montana way back in 1972.

(Written to the Captain – aka Mark Ward)