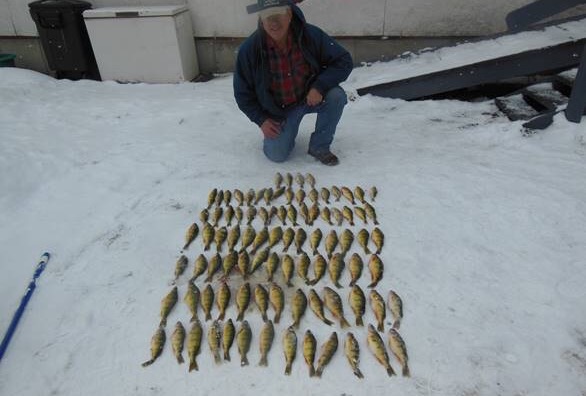 As good as the perch fishing was in the river below and at Polson, my thought was that the fishing will be as good or better in East Bay (extreme East side of Polson Bay) when the ice comes on.

We had early ice around Thanksgiving and the small amount of time I spent on it showed great promise for later on. Everywhere I punched a hole there were perch; many of them pretty decent sized.

That ice disappeared with warmer weather and wind took its toll. Now it has frozen up again but under different circumstances. Snow on top of thin ice slows the freezing process appreciatively. Checking the ice several days ago I decided to wait a couple of days before trying again. Yesterday I headed out again and found the ice thickness hadn’t gained much but because I was only in about a water depth of only 3 ½ feet I decided to take a chance and fish anyway. The next two hours were incredible. There were times when there were upwards of 20 fish at a time attacking my fish eye baited jig. I had 2 problems plaguing me. The first was trying to keep my bait away from the smaller fish. Second, the ice was slowly sinking around me. I knew I’d have to leave at some time or the ice would break but the fishing was so good I was in a real dilemma. I set a goal; fill a 5 gallon bucket with perch then leave. With close to ¾ of a bucket I began to notice that the smaller fish that I was throwing on the ice at first were lying flat but now there was so much water on the ice they were swimming up right. As much as I hated to I decided not to exacerbate what already most would consider stupidity and move. I was still able to come close to my goal (see picture) Upcoming cold weather should rectify the thin ice situation.

This is a great start up fishing opportunity for young people and if you aren’t much for ice fishing the open water fishing this spring should also be phenomenal.