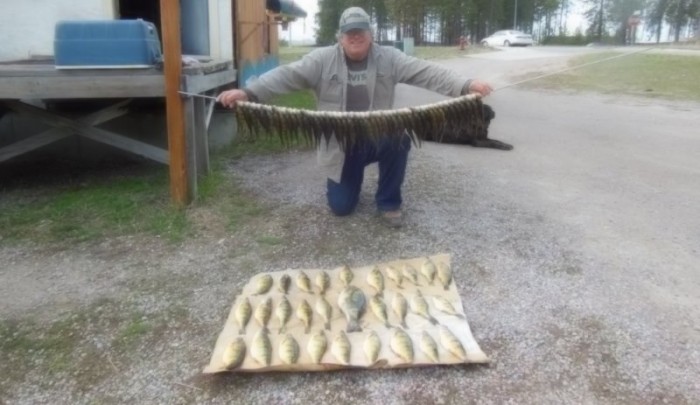 Fishing Report by the Macman (3.28.16)
By angelamontana

This is my third fishing report in as many weeks.  If you wonder why, it is because I am excited and there’s a need that only you all can fill.  The problem is too many fish.  When any species gets over populated, their close proximity and a diminishing food supply weakens them to a point that they are disease susceptible, where large kill off take place.

Once in my teen years in early spring I was on East Bay of Flathead Lake when I found the bottom littered with dead perch.  That was back before they weren’t as popular a fish as they are now.  The only alternative then was to let nature take its course.

Yesterday, the day before Easter, 2016 Marty Herrick and I ventured again out to East Bay late in the afternoon. There was a pod of 10 to 15 boats in mid-bay North to South fishing in a 3 ½ to 4 foot depth.  We started in closer to shore then the rest of them and probably could have gone into a 2 foot depth and still been in the fish judging from what has been the norm during past seasons.

There was one boat separated from the rest of us anchored about a ¼ mile to the north.  Because they weren’t moving is usually an indication that they were catching fish.  Another boat stopped short of us about a ¼ mile west.  They also anchored up and weren’t moving.  They were also pretty talkative which is another indicator that their having good fishing.  By then most of the other boats had begun to leave, until there was just my boat and the one ¼ mile away west.

Because large predator fish will often times be out on the edges of schools of forage fish I said to Marty, “Why don’t we go out where those folks are and see if we can’t catch some lake trout along with the perch?”  So we headed out and anchored maybe 75 yards north of them.  If anything we found even more and larger fish here.  No lake trout but so many perch it boggles the mind.

To avoid a major kill off I would encourage maximum pressure on them.  Better to possibly overfish them, than to have them dead on the bottom of the lake due to a disease.

If, just for your groups personal best day, you wanted to take home 1,000 fish (4-52 quart coolers), approximately 250 fish to the cooler) now would be the time.

When fishermen are pulling up their anchor getting ready to leave, I’ll ask them, “Did you catch enough?” Their response is often a sheepish not too enthusiastic, “yeah.”  There are probably three reasons for that response.  First, they’re tired, second they feel a little guilty for keeping so many fish, and, third, they’re faced with several hours of processing fish.  The first and the third there is no help for, but as far as the guilty part goes, don’t be.  You are doing the fishery a favor.  The upside is a 52 qt. cooler full of fish produces between 3 and 4 gallons of delicious fillets.

If you are interested in learning a clean, fast way to process your perch come by our store in Pablo and if I’m around I’ll be happy to show you the Zimmer fillet method.

The fish and Game’s management of Flathead has turned it into a fishing cornucopia.  Whether intended or unintended is debatable.  Not only are the perch, small mouth bass and crappy doing well but the deep water lake trout numbers seem to be way up judging from the record numbers being caught in the Mack Days contest.

Contrary wise, the number of shallow water lake trout is down probably due to a combination of gill-netting and fish caught rod and reel during the tournament.  The small mouth and perch aren’t being harassed by large numbers of lake trout and has been the major contributing factor to their population buildup.

I’d actually like to see the limit of small mouth raised to at least 10 per day because they have such a tendency to dominate wherever they are.  Largemouth aren’t nearly as aggressive or versatile so to keep that limit and 5 with some length restrictions isn’t a bad idea.  There is another new fishing opportunity on the horizon.  Because they’ve opened Lake Mary Ronan for the entire year the kokanee bite should be spectacular as soon as conditions allow boats to put in.  In early spring to catch a limit of 10 fish in 15 minutes to an hour from the time you drop your line should be the norm.  Corn for chum, maggots or raw shrimp for bait, and, if you’ll forgive the prejudice, Zimmer Salmon Ready to go’s for tackle will speed the process along.  A light pole, like a 4 foot perch assault rod will also be a real help.

We are cursed with too many fishing opportunities and not enough days to take advantage of them.  For the record, I’d like to reiterate, the perch fishing in East Bay is beyond incredible and to catch them till just before your boat sinks in alright.  Does old Zimmer exaggerate? Only one way to find out …