While you undoubtedly will be wearing green in honor of this special day, you won’t however need the luck of the Irish to catch fish in the rivers and lakes as there are plenty of opportunities. After spending last weekend chatting with folks at the Great Rockies Sport Show in Missoula it is apparent they are ready to hit the open water if they haven’t already. There is speculation that spring spawning for perch, walleye, northern pike, and bass might be earlier than normal as a result of the mild winter temperatures that much of Montana has experienced. Ice has come off early on many lakes in Montana this year. Dick Zimmer, the Macman out of Zimmers Tackle in Pablo gave me a call late last week and reported that the spring perch bite has already began on Flathead Lake in East Polson Bay. “A guy called the store and said that they were catching lots of big perch”, he said.   And speaking of Yellow Perch I received this reminder in the change in the fishing regulations from Mike Howe out of Kalispell, “local anglers need to be aware of a regulation change now in effect on Smith Lake, Lower Stillwater Lake and Flathead Lake that limits you to TEN perch over TEN inches daily.  Still no limits on the daily and possession numbers, as long as the “ten over ten” limit is observed”. 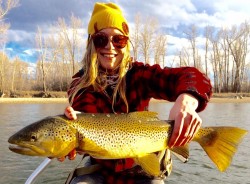 My daughter Kelsey (pictured on right), who recently moved back to Missoula, was out on the Bitterroot River last Saturday fly fishing with a friend when she hooked the largest fish she has ever caught. “I was using an articulated sex dungeon streamer and caught and released a 30-plus inch Brown trout”.

Trout fishing on Holter Reservoir has been very good, according to reports I have been hearing. Anglers have been using everything from night crawlers on a jig to trolling rapalas or spoons. The boat ramps are all open across the reservoir but the docks are not in yet at Log Gulch or the Lower campground so it might be a little harder for you to get in and out of your boat at the ramp. The Gates of the Mountain boat ramp does however have its docks in. I haven’t heard a lot of reports out of Hauser but Mike Mandell from Missoula told me he was fishing over on the reservoir a week ago and fishing was slow. Sharon from the Silos RV on the south end of Canyon Ferry Reservoir said the ice is all off on the south end and boat anglers are beginning to fish but the reports on the walleye fishing have been slow so far.