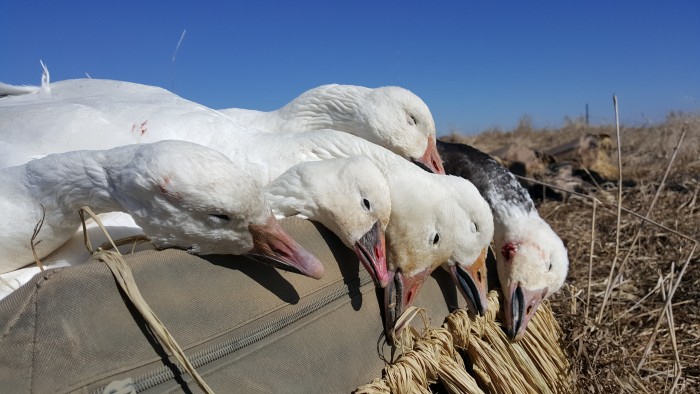 The spring light geese season in South Dakota allows hunters to take snow geese, ross and blue geese.  Blue geese are a color phase of the snow goose while ross geese associate with snows they are smaller and have a different beak profile.  Taking all three is a special way to round out a challenging field hunt and it’s referred to as a light geese slam in some circles…

Day one of our recent two day hunt was tough because the geese would not commit to the 1250 decoy spread complete with spinning bird motors, wind socks, full body birds and fluttering birds on a stick.

Day two however was everything snow goose hunters dream about.  Thousands of geese hovered over us in waves along with ross geese and blues.  As the lower tier of birds came into range we shot one to three geese and sent the dog after them.

The action continued for hours as migrating flocks repeatedly turned from their northern destination and checked out our spread.  Sometimes dropping in from the stratosphere and other times flying out before a shot was fired.

Hunting spring time snow geese was incredible.  We used Goosehog Outdoors and were happy with our guide and the quality of the operation.  For more info call Dan at :(701) 739-3130.  Dan will be outfitting hunters through April.