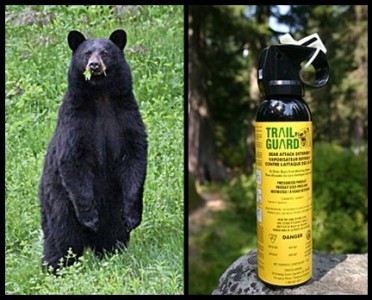 The bears are coming!
By Moosetrack Megan

Grizzly bears are emerging from hibernation in the Greater Yellowstone Area, so hikers, skiers and snowshoers should stay in groups of three of more, make noise on the trail, and carry bear spray. Bear spray is a good last line of defense, if kept handy and used according to directions, when a bear is approaching within 30 to 60 feet.
The first confirmed report of grizzly bear activity in the Park was February 22. Wolf biologists observed a large grizzly bear in the Nez Perce drainage.
Bears begin looking for food soon after they emerge from their dens. They are attracted to elk and bison that have died during the winter. Carcasses are an important food source, so bears will sometimes react aggressively while feeding on them. The park implements seasonal bear management area closures to reduce encounters between bears and humans in areas where there is a high density of elk and bison carcasses. Visit http://www.nps.gov/yell/parkmgmt/bearclosures.htm for a listing of bear closures.
Yellowstone regulations require visitors to stay 100 yards from black and grizzly bears at all times. The best defense is to stay a safe distance from bears and use binoculars, a telescope or telephoto lens to get a closer look.
While firearms are allowed in the park, the discharge of a firearm by visitors is a violation of park regulations. The park’s law enforcement rangers who carry firearms on duty rely on bear spray, rather than their weapons, as the most effective means to deal with a bear encounter.
Visitors must keep food, garbage, barbecue grills and other attractants stored in hard-sided vehicles or bear-proof food storage boxes. This helps keep bears from becoming conditioned to human foods, and helps keep park visitors and their property safe.
Visitors should report bear sightings to the nearest visitor center or ranger station as soon as possible. Updated bear safety information is available on the Yellowstone bear safety webpage athttp://www.nps.gov/yell/planyourvisit/bearsafety.htm and in the park newspaper available at all park entrances.