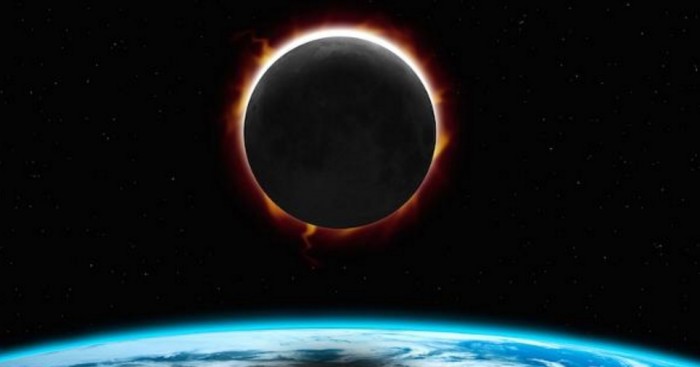 When I moved to the island of Guam as a 22 year-old, I was sitting in the car, looking around thinking there was something wrong with my vision.  I had just traveled thousands of miles halfway around the world, and I couldn’t figure out why everything I looked at seemed to have strange lighting, but the sky was still blue without a cloud in the sky.  I am not even kidding.  I started to panic thinking that my eyes were going bad.  It wasn’t until we talked to a realtor on the island that we were told there was a solar eclipse going on at that particular moment.  WHEW. I spent more time feeling the relief of my eye sight being okay than I did actually enjoying my first solar eclipse experience. Oh, to be young again.

Well, here I am 15 years later, and I find out from Science Alert that there will be another solar eclipse taking place during the early hours of March 8 – 9.

“You notice something off about the sunlight as you reach totality,” says Sarah Jaeggli, a space scientist at NASA’s Goddard Space Flight Centre. “Your surroundings take on a twilight cast, even though it’s daytime and the sky is still blue.”

Apparently, in the middle of the Pacific Ocean, Indonesia, Papua New Guinea and Borneo are the places to be for those who want to experience the full effect of the eclipse.  The rest of us?  Well, we won’t really get to experience much of it.

Just after 6:00 p.m. (AEST), the eclipse will begin over Indonesia and move northeast for approximately 3 hours over Borneo and then the Pacific Ocean.  The path of totality will cover an area 8,800 miles long and 97 miles wide at its widest point, with each location experiencing darkness for 1.5 to 4 minutes.

ABC News reports that people living in northern Australia – basically anyone north of a line drawn between Perth and Rockhampton – will also get to see a partial solar eclipse on March 9.

So, what does this mean for us in the United States lower 48?  Well, not much now, BUT we get our solar eclipse experience here in Montana next year on August 21st, which will be the first one visible from the US mainland since 1979!  Apparently, this one will be visible from East Coast to the West Coast, which hasn’t happened since the June 8, 1918 solar eclipse!

“The path of the … shadow begins in northern Pacific and crosses the US from west to east through parts of the following states: Oregon, Idaho, Montana, Wyoming, Nebraska, Kansas, Missouri, Illinois, Kentucky, Tennessee, North Carolina, Georgia, and South Carolina,” says NASA, adding that a partial eclipse will be visible from a much larger region covering most of North America.

So, as we’re looking forward to the sun shining, it’s funny how so many of us will be looking forward to darkness for a matter of minutes, too.  Bec Crew with Science Alert suggests that  if you plan on trespassing on “sacred Incan burial grounds”, the time to do it is during the solar eclipse. You can still check out the upcoming March eclipse online here.