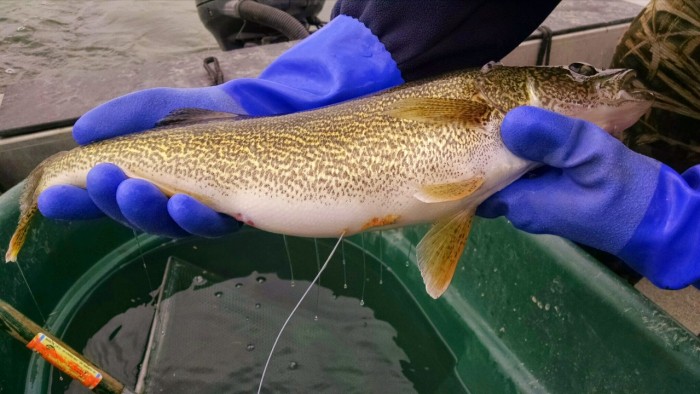 FWP staff kicked off the 2016 Canyon Ferry Reservoir walleye spawning survey on the south end of the reservoir on April 4th.  The current weather pattern has only allowed traps to fish for a handful of days, but a few nice days late last week had walleye cruising the shoreline.  As per usual, most of the fish we’ve seen thus far have been males, both mature and immature, but about 10% of the total catch has been green (unripe) females.  FWP staff has only handled one ripe female so far during the survey, which is typical this early in the survey.

Snow and inclement weather are projected to wreak havoc on the area for the next 2-3 days, so it’s safe to say that optimal walleye spawning temperatures (48-52 degrees F) likely won’t be reached until the current weather system moves out.  The peak of the walleye spawn in Canyon Ferry is typically around April 20th each year and the current forecast looks to be lining up with that timeframe once again in 2016.

FWP staff is also concurrently monitoring walleye movements in the area, using radio tagged fish, to better understand how walleye move between Canyon Ferry Reservoir and the Missouri River upstream to Toston Dam.  In 2015, walleye migrated into the river, were relocated throughout the entire 23+ miles of river to Toston Dam, and then out-migrated to the reservoir in the fall of 2015.  Some of those same walleye, along with recently implanted walleye, have been relocated in the river, specifically between the river delta and the HWY 12 Bridge (near Townsend), within the last week.  So, if you’re interested in fishing in the river for walleye, I’d say wait until the current fowl weather subsides, then get after it because they’re headed your way.

Please call 495-3263 if you’re interested in volunteering for a day out on the water or just want to talk fishing!