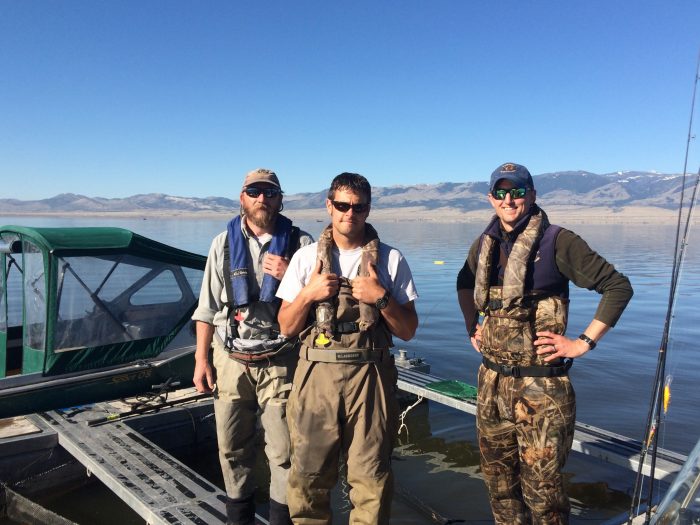 Fishing for walleyes was fun and interesting last week on Canyon Ferry Reservoir. Downrigger Dale and Allan Tabish from Missoula joined me for a few days on the water. The fun part was pulling Berkeley flicker shad lures 1.8 miles per hour and catching walleyes in 2-5 feet of water. We caught a lot of males that were in the area for the walleye spawn on the south end of the lake by Pond One. The largest walleye that we caught was only 161/4 inches long and many of the fish were smaller in the 12-13 inch length. The interesting part of the trip was the opportunity to meet up with FWP fishing technicians Adam Strainer, Chris Hurley, and Casey Jenson. 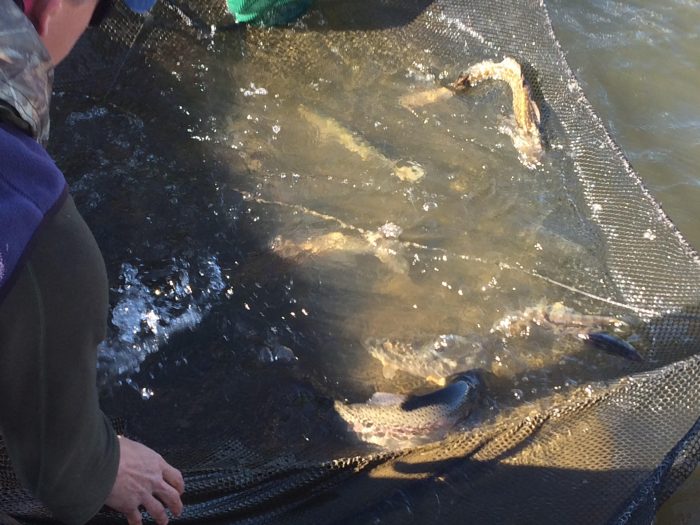 They were kind enough to let us tag along while they checked a couple of their fish traps located on the east and west sides of the lake. Strainer explained to us that because of the prevailing northwest winds the walleyes like to spawn on the east side of the lake because the wave action keeps the gravel cleaner. The traps were place on the reservoir April 4th and will be removed on May 4th.  These are live traps that are checked every 48 hours and all fish are released after they are studied. These two traps can tell some very interesting stories not only about what the walleyes are up to, but also about what else lurks about in the waters of Canyon Ferry Reservoir. 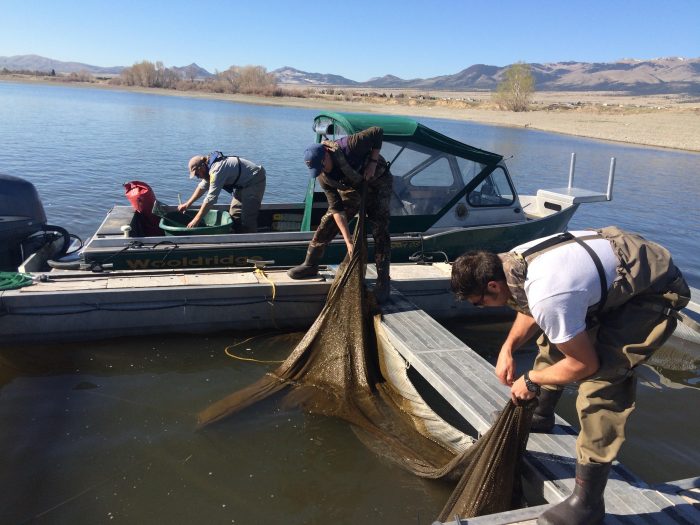 As they pulled up the nets in the first trap on the east shore we saw a rare site. It was a large Burbot or Ling as many folks call it.  Strainer also pulled out a small Stone Catfish and held it in the palm of his hand a fish I had never seen and had no idea existed in Canyon Ferry. There were a few male walleyes in the net which they tagged and released. Strainer said the number of walleyes caught in the nets this year has been lower than usual. He suspected that the unusual warm temperatures in February got the fish biological clocks to start ticking sooner than normal. Therefore the walleye spawn started before it was possible for the FWP to be able to place the fish traps out in water. Also found in the nets were several nice sized rainbow trout, carp, suckers, perch and to our surprise a blue gill, another fish I had no idea existed in Canyon Ferry.  Click here to see video footage.

The Montana Walleye Gov Cup has filled. The 200-two person team tournament which takes place July 7-9th filled over two months early. Last year the tournament filled in late June, Lisa Koski  Executive Director from the Glasgow Area Chamber thinks that the success that they had last year helped with registrations this year, “Some folks were left out last year so many of those entered early and with all those early entries it looks like they helped the process along”.  The fishing has been picking up for walleyes with Todd Young catching some nice walleyes last weekend in the dry arm of Fort Peck. The lake trout fishing by the dam has been very good with some anglers picking up a Chinook salmon now and then while they target the lake trout.