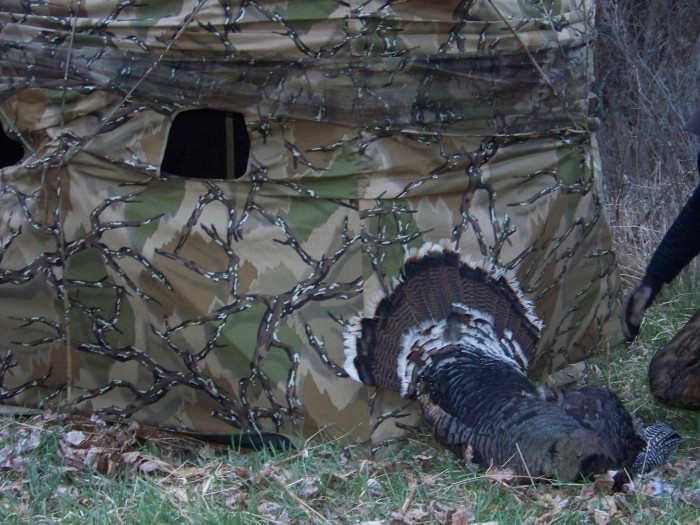 Leaving Your Calls At Home For Tom Turkeys
By Toby Trigger

Hunting turkeys is often made overly complicated especially by call manufacturers who want us all to believe that the secret to success is the latest and greatest calls with creative names like “turkey busting extravaganza call” or “tom foolery”.

We get advice like “start calling with a series of three yelps followed by 9 clucks in a descending resonating tones.”  Really?  Are we supposed to believe that those old tom turkeys out there trying to sow their seeds are pragmatically thinking about these things?

My own turkey hunting experience began twenty five years ago when on an opening morning a few thousand miles from Montana I arrived before day light to a field where I had seen turkeys while hunting white tailed deer in the  fall.  We knew nothing about hunting turkeys back then, no one did because it was brand new.  As I settled in with my back against a tree I heard the first gobbles of the morning and reached into my bag for my box call.

It wasn’t there.  For the next few hours I cringed every time I heard a gobble because there was nothing I could do to bring them in.  From across the field I watched two tom turkeys in full strut following hens around like teenage boys at a school dance.

“If only I were sitting over there” I thought.  I finally bagged a turkey with a single decoy in a field with some mediocre calling later in the season.  But I had not put it all together yet. 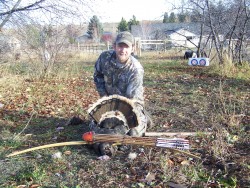 The author with a turkey taken without calls, decoys or anything other than good woodsmanship.

Ten years and as many gobblers later I was deep in the forest listening for a tom turkey to gobble.  My techniques had evolved over the past decade to a more subtle approach where I would locate toms at certain times in the morning.  Then I would come back to that area the next day and wait.  I watched an old tom strutting up and down a skid road.  He would gobble and walk thirty yards or so then turn and walk back.  All I had to do is come back the next morning and sit still along that old road at this time against the advice from “experts” that I should call using two yelps, four clucks and a purr…

Why?  Because toms are creatures of habit and once they establish strut zones they will be back on a schedule unlike any other animal we pursue as hunters.  What about all those calls and decoys I had accrued?  I still carry them but they aren’t used much anymore because I like to be successful in the turkey woods. 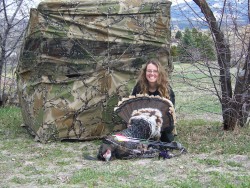 Hunter Katie King with a tom turkey taken by studying the travel routes of elusive birds and simply waiting.

Here’s the take home message:  yes calls, decoys, ground blinds, turkey loads, and prayer can help you bag a big tom.  But good woodsmanship will out perform all the latest advancements in call technology every time.  Scouting isn’t just finding turkeys or turkey sign.  It’s establishing patterns.  Locate the roosting tree, watch where the birds land in the morning and where they go from there.

Be patient.  It’s hard to watch turkeys all day and not put a move on them but once you know exactly what they are doing your next move is to find the right place to sit and wait when they come back – tomorrow.

Calling a big tom from 1/4 mile a way is exciting but when they come in they are looking for you.  I’ve had my fair share of calling turkeys in and sometimes it’s the only way to hunt if the birds are on a property that you don’t have access to. In that case you’ve got to get as close to the roost as you can and coax the birds to you.  But if you’ve got access to the strutting zones just leave those calls at home. 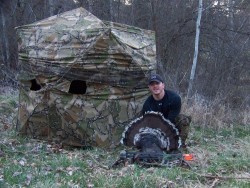 Hunter Heath Helgert with a tom turkey taken by surprise without calling.

When a big tom fans his feathers at 15 yards and walks behind the bead on the end of your barrel your heart will be pounding and your tag will be filled despite all the marketing from $50 call makers.