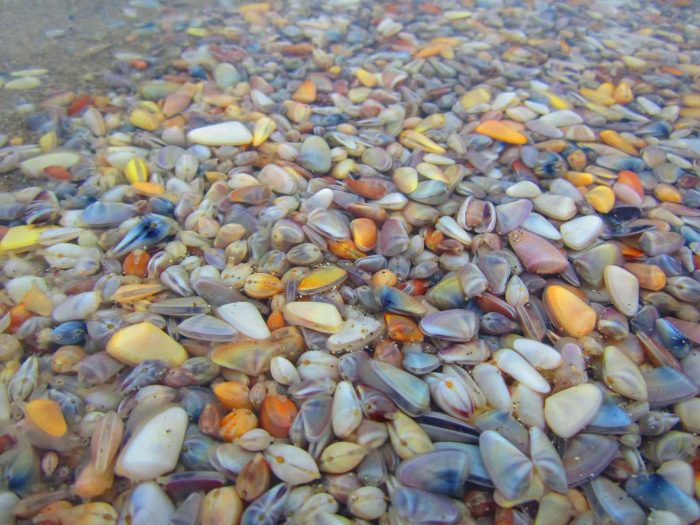 Hundreds of Clams Emerge from the Earth–Like a Horror Movie?
By angelamontana

Hey…clams gotta eat and reproduce, too!  If you haven’t ever seen what it looks like when hundreds…more like thousands of Coquina Clams emerge to most likely feed and breed, then brace yourself for the terror…okay, it’s really not terrifying, it’s just startling at first.  Imagine standing in the water in North Carolina, taking in that salty air and BAM–the tide comes in and goes out.  There are clams EVERYWHERE around your feet, under your feet.  It might not weird some people out, but it would freak me out for a minute.  Below is the actual footage taken by “paul-E” on YouTube and his description.  Nature is pretty cool.

Topsail Island, NC, June 26, 2012. I went down to the beach at 9:30am under an overcast sky as the low tide was coming in. I found piles of Coquina clams just above the incoming tide line, lining the beach from one end to the other as far as the eye could see. At first I thought they were dead but then a full wave cycle exposed the Coquina’s rabid feeding behavior. As the Coquina sensed the incoming wave, they popped up out of the sand to filter-feed on the small plants and animals that enrich the fresh Atlantic waters. The ritual repeated on each major tidal wave, about once per minute, when thousands and thousands of Coquina, all along the miles of beach stretch, were synchronized in nature’s perfect order. We’ve been to this exact same beach many, many times for years and never witnessed this before and it did not occur again for the following five days that we were there. So we suspect this may have been a breeding activity because of the massive participation and because it is rarely observed.