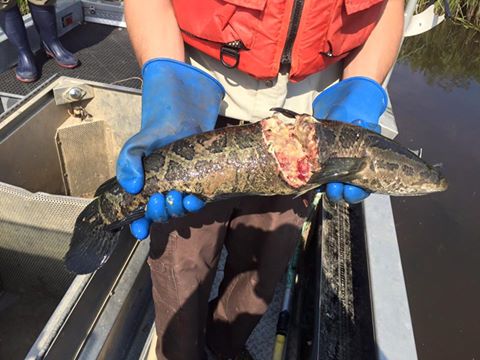 If You See This Fish, Contact Your Local Fish & Game Office!
By angelamontana 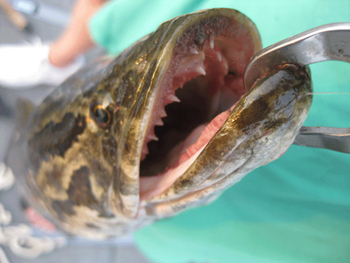 We, in Montana, face the threat of invasive species with a variety of aquatic species, which is why it is important to clean your vehicles and boats & boat trailers after every use, and several other animals, including some fish, such as carp.  Our friends over east in Maryland at the Maryland Fish & Wildlife Conservation Office recently posted an invasive species in their neck of the woods called the Northern Snakehead.  This is no ordinary fish.  Think carp times 50.  These Northern Snakeheads are so tough that they even have the capability to live through almost being severed in half!  The one pictured above was captured alive!

One reason Northern Snakehead are considered an invasive species is their ability to survive in harsh conditions. The fish pictured below was captured ALIVE during electrofishing surveys. It even smelled of rotting flesh. While it’s unknown if the fish would have survived for a long time, it’s wounds were healing over and the fish swam ok just prior to capture.

As a matter of fact, Montana prohibits any type of Snakehead species of fish from being possessed, sold, purchased, exchanged, or transported in the state of Montana at all, according to Montana FWP.  There’s apparently good reason for that.  Here’s part of the reason why:

The northern snakehead is a freshwater species and cannot tolerate salinity in excess of ten parts per million.[5] It is an obligate air breather; it uses a suprabranchial organ and a bifurcated ventral aorta that permits aquatic and aerial respiration.[6] This unusual respiratory system allows it to live outside of water for several days; it can wriggle its way to other bodies of water or survive being transported by humans. Only young of this species (not adults) may be able to move overland for short distances using wriggling motions.

So, if you are ever fishing anywhere, and you catch a Northern Snakehead, do not throw it back!  These tough cookies do not belong here.  Call your local Fish and Game office for more information.  Click here for a list of prohibited animals in Montana.