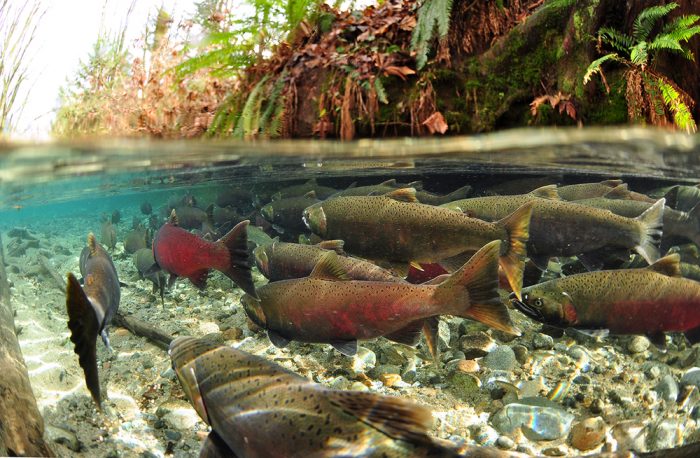 We’ve been able to run the Upper Salmon River Chinook fishery for nearly 4 weeks now, with the majority of the catch coming from the upper reaches of the river from Challis to Stanley. I’ve received lots of calls regarding how long the fishery will go, and rumors have swirled that we will be closing the fishery this week – that is not the case.  Hopefully this will help clear that up…

Currently, the majority of the fish headed for the upper Salmon River have moved through the Columbia and Snake River system. And while there may be a few stragglers still coming, we currently have over 3,600 Sawtooth chinook over Lower Granite Dam – that has pushed our harvest share up to nearly 1,300 fish. Below are more details of hatchery returns and angler catch rates, but to date we have harvested 787 adult chinook from the upper river sections (above the Pahsimeroi R) and 102 adults from the lower river sections (below the Pahsimeroi R). Over the past few weeks, anglers have harvested ~250-350 chinook per week – based on that, we should be somewhere in the neighborhood of ~1,100 fish harvested after this weekend (7/17).  We’ll re-evaluate next Monday (7/18) after we run the numbers and determine if we can get another week/weekend out the fishery to reach our harvest share.

In the meantime, adult Chinook continue to return to both hatchery facilities. While the number of fish being trapped at Sawtooth hatchery has started to taper off, trapping at the Pahsimeroi has remained fairly steady (see below) 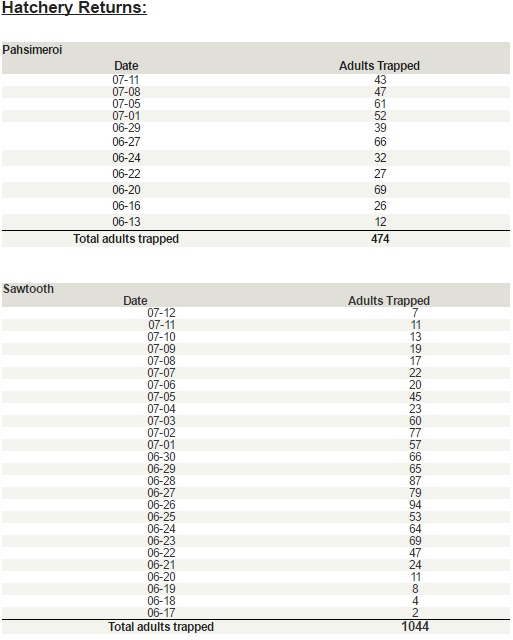 As of today (7/13), the Salmon River is flowing at 1,510 cfs through the town of Salmon, ID which is 54% of average for today’s date. The Salmon River downstream of the Yankee Fork in location code 19 is flowing at 931 cfs, which is 66% of average. Over the weekend, mid-morning water temperatures ranged from the upper 50’s to the low 60’s.  We saw a slight bump in flows over the last couple of days as the result of heavy rains on Sunday and Monday, but the river has remained clear and vey fishable. This, combined with our current weather forecast (mid- to high-70’s in Salmon thru next Monday) should make for excellent fishing conditions.