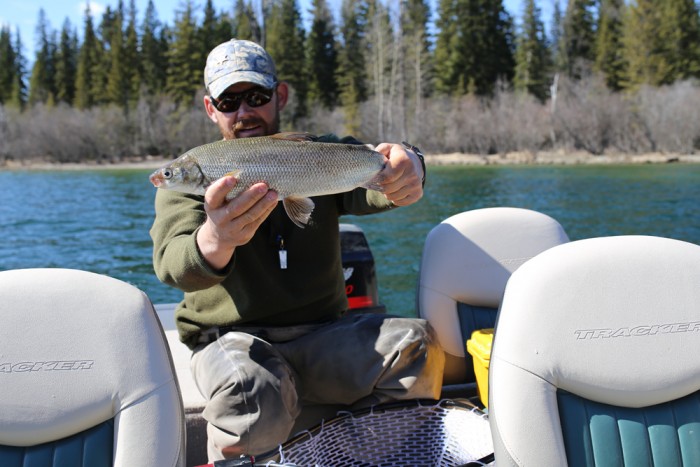 Fished Elmo twice this week, both times slightly east of the Elmo ramp in 55’ of water. Both days were very different.
Fished Wednesday as the front was moving out, we dealt with cold, rain and light gusty winds. I thought that would put the fish off but the bite was steady from 8 to 11. The whitefish preferred minnow imitations over jigging spoons. The top lures were a standup jig head with a Berkley Power Minnow and a Gitzit. Three of us caught about 25 whitefish in 3 hours.
Friday morning was sunny and started calm. Fished again east of the ramp, at one point there were 15 boats. The bite was actually slower but most boats got fish. The 1/8 oz. Gitzit was the hot lure for two hours, then the bite switched to Northland Mimic Spoons. It pays to switch around if bites tail off. We fished from 8 to 11:30 and caught about 20. Fish were biting very light and the wind picked up, making it tough.
Overheard conversations that Thursday’s bite was very good, one party did well in front of Big Arm at 2 pm.

This is second hand but a friend said his friend went to Woods Bay at daylight this morning and filled a cooler. Chancy said he has heard a few reports. Chancy also heard of someone fishing the delta in the evening and doing well.