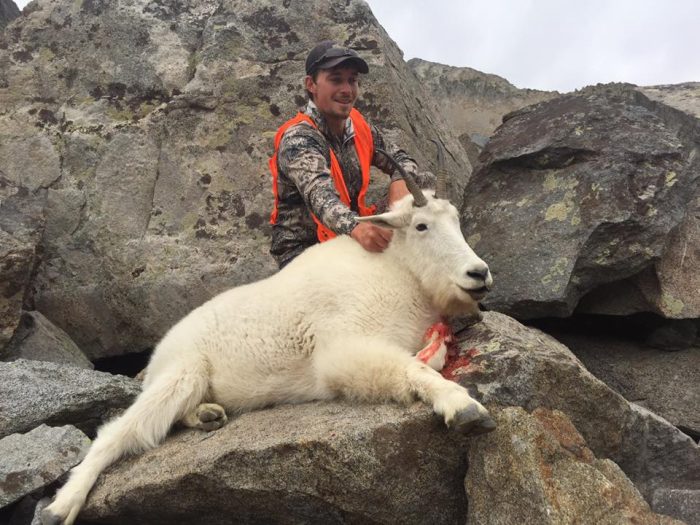 Dyllon Hall found himself staring through a spotting scope at what he thought was a nanny mountain goat amidst the towering rocky peaks in one of Montana’s premier mountain goat units.

“People told me that I wouldn’t be able to see the glands at the base of the horns on a nanny but there I was looking through a 60 power scope and I could see glands!” Dyllon said.

It isn’t uncommon for hunters who have an either sex permit to mistake a mature nanny for a billy goat but when there isn’t any room for error the stress level goes up.

Dyllan had a special permit to harvest a “nanny only” mountain goat and he was nervous about mistaking a nanny for a billy.  His friend was in his ear urging Dyllon to shoot, already convinced it was a nanny.  “I told him to put the breaks on, I’ve got to convince myself here” Dyllon laughed.

But at the time he wasn’t laughing.  There is a lot of pressure to shoot the right goat and the differences between nanny goats and billys are subtle.  Admittedly Dyllon hadn’t had much opportunity to study mountain goats making the processes even more stressful. 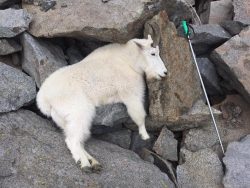 Finally after several minutes of studying the animal, Dyllon settled in and pulled the trigger.  He was certain that he had shot a nanny but he couldn’t shake the fear that he had somehow made a mistake.  “The whole time as I was walking up to it I was still nervous.” He recalled.  But lifting the hind leg to confirm the sex came with a sigh of relief.  Dyllon had his goat. 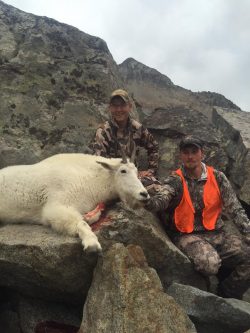 Drawing a special permit comes with a special responsibility. Congratulations to Dyllon Hall for taking his first mountain goat and for taking his actions in the field seriously.  That’s a beautiful looking goat and a great example of how true sportsmen feel at the moment of truth.