Firearms development in the 20th Century occurred at an incredible pace; in fact at rocket speed. During both World Wars needed improvements is firearm efficiency and power were met by America’s firearms industry

engineers and inventors. Entering WWII, the U.S Military has the very best and only semi-auto main battle rifle, the M1 Garand, firing the potent 30.06 Springfield cartridge. The great John Browning designed Model 1911 pistol and its powerful .45 ACP cartridge was the handgun that the rest of the world’s militaries longed for. In addition, Browning designed machine guns, the great ’03 Spri

ngfield rifle, and the Thompson sub-machine gun gave American forces some of the very best hand held and shoulder mounted firearms ever fielded by any force at any time. 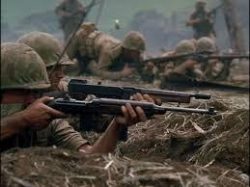 arly in the war, the U.S. ordinance department saw a need for a lon
g gun in place of the 1911 pistol. Tank crews, rear echelon and support personnel, and eventually paratroopers all had a need for a rifle that was compact, light, and easily stored. This gun evolved into the Winchester M1 carbine.

Winchester developed the M1 Carbine to meet the Army’s need for a “light rifle.” It was chambered in .30 Carbine, a round much less powerful than the 30.06. There was more than a little grumbling in the ranks about the lack of power offered by the .30 Carbine, but when used as a short range cartridge (200 yards or less), the little round proved to be effective. 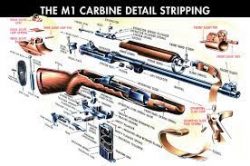 was a gas piston operated semi-auto much like the Garand. It was light, just a bit over 5 pounds, had walnut stocks and an eighteen inch barrel. Overall length of the gun was about 36 inches and it was fed with a 15 round detachable magazine. There were several versions; changes were made yearly during the war and one of the very best was the M1A1 with the folding wire stock designed primarily for airborne forces. During the course of WWII, over 6.5 million M1 carbines in various configurations were produced. After the war ended, millions of the handy little carbines were offered at incredibly low prices to the American shooting public. Coincidentally, the first center fire rifle

I ever shot was an M1 carbine that belonged to a family friend; for me it was love at first fire.

Like so many military surplus guns, the price of M1 carbines has really escalated in recent decades. In the not too distant past one could find a decent gun f

or a few hundred bucks. I checked the CMP website and all the M1 carbines are now offered only in an online auction. Open auction items has low bids of over $800.00 and some rifles were approaching $3000.00 at the time of this writing. Needless to say, you can’t buy a cheap M1 carbine any longer. But there is now another option.

Inland Manufacturing is a fairly new venture now producing M1 carbines that are true to the original design. The little rifles are so true to the design of the WWII guns that parts produced in the war are interchangeable with those of Inland’s new guns. Now that is attention to detail! Like the originals, these reproductions

are offered in several versions, including a pistol design. Prices start around $1000.00. For more information, use this link: www.inland-mfg.com.

The handy little rifles from Inland give all of us gun folks another option to own a piece of history. They are true copies of one of history’s greatest guns and would make a very nice and useable addition to anyone’s collection.