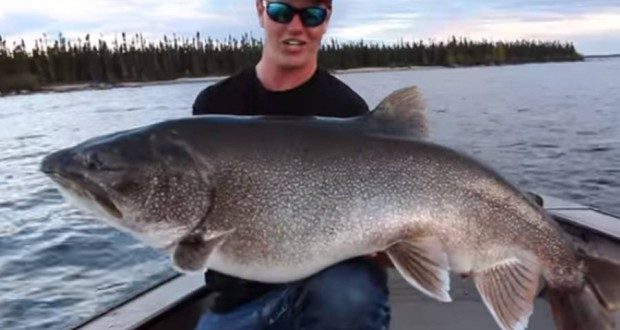 Wind, rain, & rough waters were the conditions anglers were faced with over the fourth weekend of the 2016 Fall Mack Days Fishing Event. The total entries for the event stand at 7,367. Fridays total was 289, Saturday 579, and Sunday 303. Anglers are competing for Up To $150,000 in Cash and Prizes sponsored by the Confederated Salish and Kootenai Tribes and sanctioned by Montana Fish, Wildlife, and Parks. Keeping fishing lines in the water during those rough conditions is difficult at times when the waves are rolling and the boats are rocking but many anglers found spots to anchor up and fish. Sundays wind sent some around the lake seeking calmer waters in Big Arm Bay.

There are over 7,000 tagged lake trout with values from $100 to $10,000 in Flathead Lake. Anglers always hope to have one or more of them in their cooler when they bring their entries in. Richard Kries of Huson had a great week of tagged fish entries. Thursday he turned in three each with $100 values. Richard along with his wife Laurie turned in four on Saturday-one valued at $200 and the rest were $100 tags. Glenn Hoffman turned in two on Saturday. One of his was $500 and the other $100. Also turning in $100 tags were Tony Incashola of St. Ignatius, Tim Mooney and Jeanee Mooney of Missoula each with a tagged fish, Sam Cusker of Whitefish, and Felix Gauci of Stevensville.

Entries are taken until the last day of the event which is used as a fisheries management tool to reduce the non-native lake trout in Flathead Lake. There is no entry fee and the Confederated Salish and Kootenai Tribes have made available to anyone a special $13 permit to fish the south half of Flathead Lake. For more information about the event go to www.mackdays.com or telephone 406-270-3386.

Leading the anglers in the Top Ten category is Mike Benson of Lonepine with 621. Benson reached a goal of over 20,000 entries since he started fishing the events over the weekend. Terry Krogstad of Kalispell is second with 590-his overall total of all events is 11,099, 3rd-Felix Gauci-489, 4th Sam Cusker-323, 5th Scott Bombard of Missoula-289-with an overall total of 13,111-second to Benson, 6th Larry Karper of Florence-238, 7th Larry Ashwell of Missoula-222, 8th Bob Stewart of Kalispell-205, 9th Richard Kreis-198, and 10th Danny Smith of Hot Springs-183.

Laurie Kreis leads the ladies with 101, Brandy Hilde of Whitefish is in second with 74, 3rd-Julie Vacca of Missoula with 40 and Deb Amdahl of Kalispell with 40, Gina Schiff of Whitefish is 5th with 32.

Larry Karper is in first in the 70 and Over category with 238, 2nd is Glenn Hoffman with 108, 3rd-Leonard Lewis of Missoula-81, 4th Bob Christensen of Missoula with 64, and 5th Jerry Luderman of Kalispell with 20.

Tyer Varga lead the 13-17 with 50 and Danner Shims of Kalispell has 12.Dalton Kluesner of Frenchtown has one entry in the 12 & Under category.

All it takes is one fish to be entered in the lottery style drawing held at the end of the event. Tickets are drawn for prizes that begin at $1,000 and go to $500. There are also many merchandise prizes that anglers can win. There are categories for ladies, youth, over 70, smallest fish, largest fish, and many more-check it out on the website.