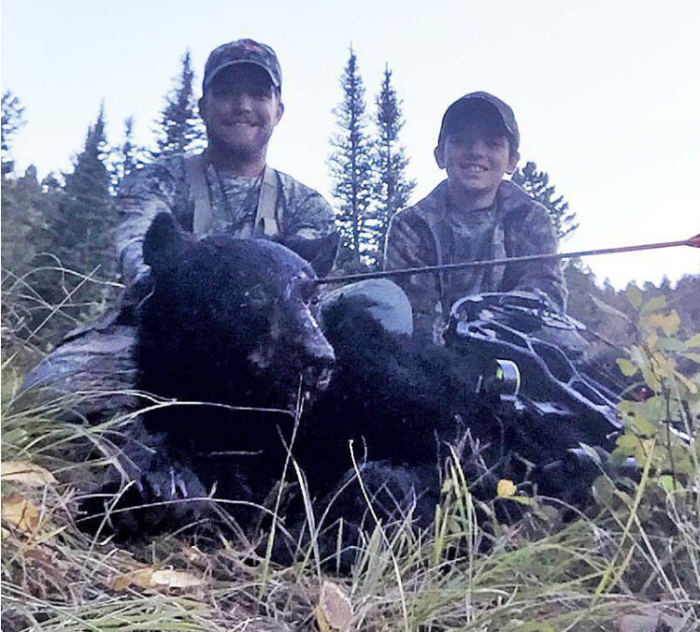 Russel Ferster is a 24 year old man from Absarokee who thought he was taking his 11 year old brother out for a typical hunting excursion in search of his first Bull elk.  They were hunting this September in the Crazy Horse Mountains.  Less than 15 minutes after leaving the truck, Russel started using his cow call.  After a couple calls, Russel and his little bro heard something rustling in the brush and thought it was a bull elk, but quickly discovered that it was a black bear that exploded out of the brush!  Russel had moved Lane when he first heard the noise, so he was clear to shoot at the hopeful bull elk coming at them.  Instead, the black bear came charging at them with his head down and didn’t notice the two until Russel shouted at the bear and got big.  The bear stopped about a free throw’s length away and started to bounce and pound its paws on the earth.  Russel quickly realized he did not have any bear spray, which he usually carries.  With mere seconds to make a decision, he got his little brother behind him and quickly loaded an arrow.  The bear charged at them at full speed when Russel drew back his compound bow and fired a direct hit above the eye of the black bear, penetrating it’s brain and stopping the bear just in time for it to slide to the brothers’ feet.  Both brothers were so overcome by adrenaline, they had to lie down and couldn’t talk about it for several minutes after the incident.