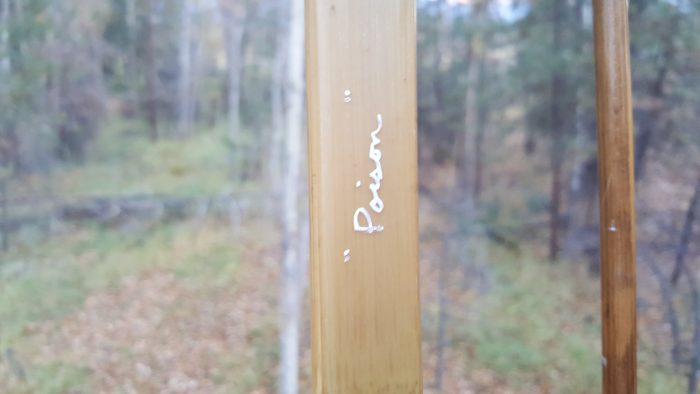 I’ve accumulated a lot of bows over the past quarter century or so.  That might sound odd to your common compound bow-hunter but it’s one of the reasons I choose to hunt with long bows and recurves in the first place.

Now, I don’t turn my nose up at pully’s and wheels.  Actually most bow hunters shouldn’t be toting a long bow around because it takes a lot of dedication to hunt with traditional archery equipment.   But the wood bows I have aren’t just Bows.  They’re more like hunting companions.

Like my bow “Poison” came to me by way of a friend who I hunted moose with.  Poison was created by embedding arrow heads found in New Mexico into the riser and sticking rattle snake skin along its back.  My friend killed an elk with Poison before giving it to me.

Poison is a straight end long bow that pulls to 28 inches with 70 pounds of umph!  The leather wrapped handle hides the fact that it is a take down bow.

Poison is beautiful but in a rugged sense.  I carried Poision along for my first Mule deer hunt years ago when I shot a 2×2 buck on a mountain side.  Later I shot turkeys and grouse before sending a heavy wood arrow through a moose in Idaho.  Now every time I pick Poison up those memories come flooding back to me like this mornings conversation over coffee. 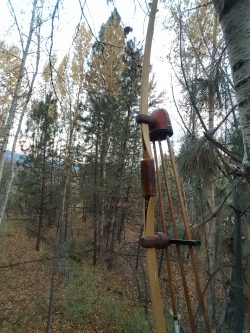 Another bow I’ve befriended is “Swampy”.  Swampy is a bow I had custom built by a friend in trade for some some carpentry work.  We’ve killed deer and black bears together and more grouse than I can remember.  There were a few turkeys and at least one pig in there too.  I’ve tried to hunt bears with other bows but always feel like I’m cheating on Swampy so I grab it and the arrows and then feel better.

Swampy pulls at 72 pounds but its longer than Poison so it feels like less.  It’s just brown on belly and back but it’s got elk antler on the tips. It isn’t beautiful in any sense.  It’s kind of like that old rusty John Deer tractor that has proven to be more reliable than your best friend.  It’s ugly but you can count on it.

I’ve got so many memories with Swampy that it takes five minutes of reflection before I can string it.

Old bows that were my Dad’s and new bows that commemorate some achievement are all weighted with memories but they carry me season after season as much as I carry them.

We’ve failed together, succeeded together and shared the glow of campfires on cold autumn nights.

These old bows are companions and, I can’t imagine not having them along on every bow hunt.