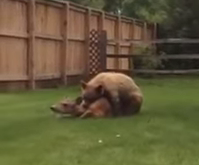 A 5-6 year old, 365 pound, adult male grizzly bear was captured above Lake Blaine on the east side of the Flathead Valley on October 19th. Montana Fish, Wildlife & Parks (FWP) had set a trap several days earlier for a much larger grizzly bear that had been damaging fruit trees.

This grizzly bear had no previous history of being captured. The grizzly bear was fitted with a GPS radio collar and an interagency decision was made to release the bear on the east side of Hungry Horse Reservoir in the Deep Creek drainage on October 20th.

The landowners have picked the apples from their fruit trees. MT FWP will keep in touch with the landowner to see if the larger bear returns.

Near the Flathead County Landfill:

A 2-year old male grizzly was caught across Highway 93 from the Flathead County Landfill after eating apples at a residence.  The bear was fitted with a GPS satellite collar and released in Whale Creek in the North Fork Flathead drainage.  The bear had no previous history of capture.

FWP has received numerous reports of both black and grizzly bears in the areas around Whitefish, Columbia Falls, Eureka, Bigfork, and along the north and east side of the Flathead Valley. Landowners are reminded to pick fruit off their trees to prevent damage to their trees and pick up all fruit off the ground to avoid attracting bears.  Electric fencing can also be used to protect fruit trees, poultry, and livestock. Pet food and grain should be secured where bears can’t get access to it. Bird feeders that contain sunflower seeds, millet, and suet will attract bears to homes. Garbage should not be left outside where bears can get into it.  In Montana, it is illegal to feed bears and ungulates; illegal foods include deer blocks and grain.

With the onset of big game season, hunters should be aware that grizzly bears can be encountered almost anywhere throughout western Montana. Hunters should read, understand, and follow the food storage orders, which also cover how you handle game that you have harvested.

Hunters should make every effort to get their harvested game out of the field and processed as soon as possible. If you have to leave your harvested animal in the field for any length of time, it is recommend to get the meat as far away from the gut pile as possible and to leave it in an open area that you can observe it from a distance. Placing tree branches or sticks over the carcass will also give you an indication that a bear might have visited the carcass if the branches are moved. When you return to a carcass always approach it with the idea that a bear could be in the area.

FWP recommends that hunters and other recreationists carry and know how to use bear pepper spray.

For more information on living and recreating in bear country visit the MT FWP website at http://fwp.mt.gov/fishAndWildlife/livingWithWildlife/beBearAware/default.html.