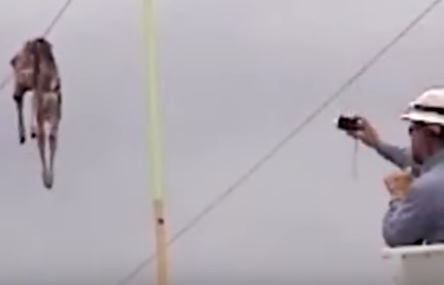 Sometimes Even Eagle Talons Lose Their Grip! [VIDEO]
By angelamontana

Have you ever dropped food on the floor?  Many people have a three or five second rule, but how does that apply if your food lands on a power line?

Back in 2011, an eagle did just that–dropped its food right on a power line in East Missoula.  Maybe the eagle had no other way of heating up its meal and was hopeful nobody would notice if it managed to get some sort of spark going to cook the venison right on the power line?  Maybe the lights were too bright for the raptor to sleep at night, so it did what it had to do to try and get some darkness, sacrificing its food in the meantime?  Maybe the eagle just didn’t have a good enough grip on the animal and it really just fell and randomly landed on the power line.  However it happened, it still kind of crazy and obviously not intentional, but it’s kind of crazy because it was right in the town next to the MORS Headquarters.