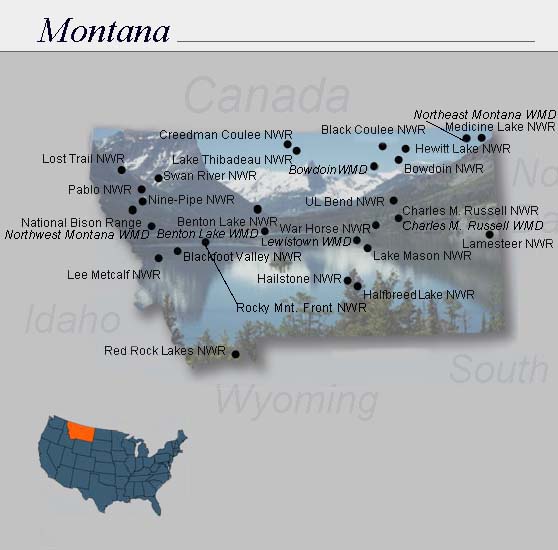 The U.S. Fish and Wildlife Service is responsible for managing more than 850 million acres of lands and waters  in the National Wildlife Refuge System, including five marine national monuments, 565 national wildlife refuges and 38 wetland management districts. With President Obama’s recent expansion of the Papah?naumoku?kea Marine National Monument in the Pacific Ocean and the newly createdNortheast Canyons and Seamounts Marine National Monument in the Atlantic Ocean – both managed by the Service in partnership with the National Oceanic and Atmospheric Administration – the Refuge System encompasses the largest conservation system in the world.

“With the recent marine additions in Hawaii and New England, under co-management with the National Oceanic and Atmospheric Administration, this is an exceptional time to celebrate National Wildlife Refuge Week and the vital role refuges play in conservation on land and sea,” said Secretary of the Interior Sally Jewell. “Americans are fortunate to have access to a world-class network of wildlife refuges close to where they live, and I encourage everyone to get out and visit one near you.”

“Refuge Week is the perfect occasion to visit a refuge for the first time or plan a repeat visit. Wildlife refuges provide a connection to nature for city and rural residents alike. More than 100 are in locations near major cities, from Houston to Philadelphia and Los Angeles to Portland, Oregon,” said Service Director Dan Ashe. “Seeing a refuge firsthand is a treat – and a good first step to preserving these special places for generations to come.”

National wildlife refuges have played a key role in the survival and recovery of many of the nation’s most at risk animals, including America’s national symbol, the bald eagle. When Elizabeth Hartwell Mason Neck Refuge in Virginia was established in 1969 to protect the bald eagle, nesting pairs of the majestic birds numbered fewer than 500 in the lower 48 states. Today, the bird has made a comeback, with more than 16,000 nesting pairs nationwide. Americans can see other animals such as elk, Delmarva fox squirrels and loggerhead sea turtles, thanks in part to the existence of national wildlife refuges.

Since 1995, refuges across the country have celebrated Refuge Week during the second full week of October with festivals, educational programs, tours and other events.

Refuges offer world-class recreation, from fishing, hunting and wildlife observation to photography and environmental education. Every state and U.S. territory has at least one national wildlife refuge, and there is a refuge within an hour’s drive of most major cities. Find a refuge near you by visiting http://www.fws.gov/refuges.

While you’re there, learn how refuges protect green spaces and improve life for you and your community. The Service’s report, Banking on Nature, shows that refuges pump $2.4 billion into the economy and support more than 35,000 jobs. More than 48 million visits are made to refuges every year. “Nowhere else do I feel such a deep sense of connection with the land, the plants and the wildlife,” offered one visitor.

Refuges are also part of President Obama’s Every Kid in a Park initiative, which aims to connect children to the outdoors and the natural world by providing free access to federal lands and waters to fourth-graders and their families.

Learn more about this year’s celebration by visiting https://www.fws.gov/refuges/visitors/RefugeWeek2016.html.