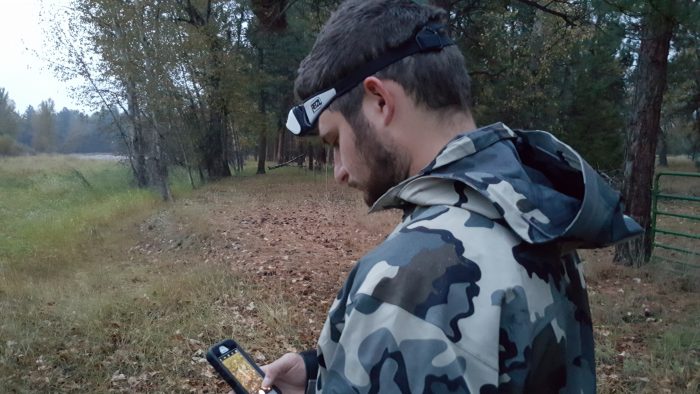 Seeing is Believing A Hunters Tale
By Toby Trigger

“I might need help tracking this one.  Are one of you available ?” my text message read to two friends.  One of the guys is a seasoned tracker the other relatively new to bowhunting and the “second hunt”.  My headlamp was dying and the blood trail led across rocks and a sand bar along the river.  “Yup!” the reply came on my screen. 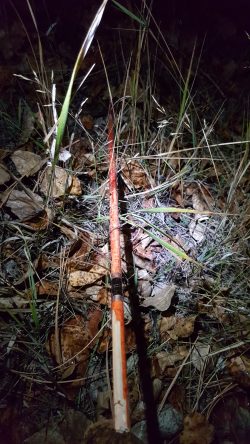 Twenty minutes later we were all at my truck.  “So what’dya shoot?”

I replied to Harry that he would see soon enough.  “Oooh I like the sounds of that!”  He said.

I didn’t correct him or ask what he thought he knew.

The trail was lit up like a runway with Harry and Thad’s headlamps.  And within 10 minutes I jumped my quarry at about ten feet.  Harry and Thad were a hundred feet behind me and never saw him.

I knew it wouldn’t be long before the animal expired and we made the decision to return in the morning.  Harry and Thad still had no idea what I had shot but had convinced themselves that it was a really big buck.  I suppose I fed their idea a bit when I said that all I would say is it was the biggest one I had ever shot.

Just before first light head lamps shined again along the trail leading past my tree stand where just several hours before my wood arrow stuck firmly into the ground covered in blood and broken.

Our steps were quiet but deliberate as I peered over the grass hummocks on the rivers edge.  “Got him.” I said.

“Yes!!” Harry exclaimed in a whisper.  But as I reached into the brush and pulled it out Harry and Thad were speechless.  I held him up proudly.  After a few seconds of awkward silence I said “Isn’t this cool?! My first coyote with a bow!  It was like crickets.  “So, do you want to help me gut him out and drag him to my truck?”

Finally a chuckle.  I began walking to my truck and stopped to ask if they would take some photos of me with my coyote.  “Uh… sure” Thad said.  Then the words came that made me laugh.  “I couldn’t sleep all night and then got up at five!”

I laughed and posed for photos.  I’m not sure if they have figured out that coyotes are a big deal for this bow hunter and that it was their expectations that I found funny.  I got good photos and at least one of our trio was entertained!

And don’t feel bad, they both made it to work on time because the recovery and pack out were so easy.