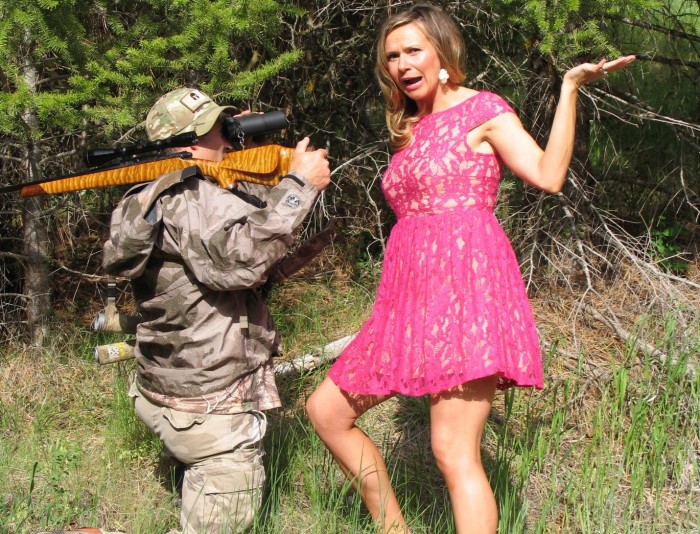 Twas the night before Opening Day, when all through the house,

Not a creature was stirring, not even a mouse;

The rifles were sighted-in and set by the front door with care,

In hopes that a monster bull soon would appear out of thin air and run into this hunter’s lair;

The outdoorsmen’s baby barbarians were nestled all snug in there mossy oak camo covered beds,

While visions of bucks n’ bulls danced in their heads.

And I, lil’ camo Mama snuggled up in bed in my gifted camo nightie

Just thinking about how my outdoorsman is so mighty-

When out in the garage, the sound of gunfire and hooting sounded,

I sprang from the bed, and oh’ how my heart pounded.

Away to the garage door I flew like burst,
I tore open the door, expecting the worst.

The fluorescent lights were casting an eerie glow
As I looked in, it was a scene of which I should easily know;

When, what to my frightened eyes should appear,
But a group of outdoorsman all suited up in their gear,

A camo clad man with a war paint upon his face and a farmer’s tan,

I knew in a moment which of these hunters was my man- the one hollering at his clan.

More rabid than a pack of wolves, this motley crew,
They whistled and shouted while chugging their brew:

To the top of the mountain! Load into the truck!
Now speed away! Tear up the gravel road! We’re on the way to our big buck!”

As solid as an army crew they were in line-ready to make-up their next hunting lie,

Packed up into the truck, without so much as a “goodbye”…

Up to the mountain-top the wild men flew,
With a truck loaded full of guns, ammo- and, of course, camo too.

And then, in a few, I heard the crew…they were back.

The cackling, yelling and the sound of munching a midnight snack-

As I cracked open the front door and was turning around,

Down the road the outdoorsman came with a bound.

He was dressed in all camo, from his head to his feet.

And his clothes were all sprayed with elk pee and the smell of deer in heat;

A bouquet of roses he had hiding behind his back,
And he looked like a barbarian ready to attack.

His eyes- how they sparkled! His step, so merry!
His cheeks were covered in war paint and his pack as heavy as he could carry!

He looked like Rambo without an ounce of fat,
And my heart went pitter-pat.

A wink of his eye and a little smile-
I knew he was trying to make up for the no goodbye and driving over a mile.

He spoke not a word but gave me a big ol’ kiss,
And squeezed me so tight I was afraid my heartbeat might miss.

And a then he was off like a light,
Running back to his truck with all his might.

He jumped in his truck, to his crew he gave a hoot,
And away they all flew down the road in full scoot;

Kristen Berube lives a crazy, laugh-filled life with her outdoorsman husband Remi and their three camo-clad children in Missoula, Montana. A graduate of Montana State University and the Northern Alberta Institute of Technology, she lovees being a mom and enjoys hiking, fishing, and camping. “Confessions of a Camo Queen: Living with an Outdoorsman” is her first book. –