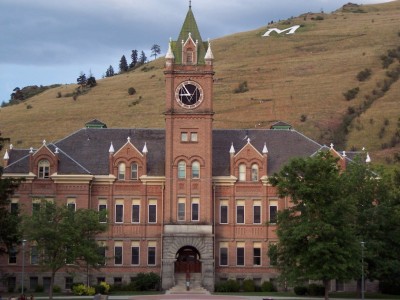 MISSOULA – “The Hard Way,” an inspirational documentary about 89-year-old ultra runner Bob Hayes, was selected as a finalist for the 2016 Banff Mountain Film Competition. In its 41st year, the Banff Mountain Film and Book Festival is one of the most prestigious mountain film festivals in the world. Presented by National Geographic and The North Face, it took place Oct. 29-Nov. 6 at Banff Centre in Banff, Alberta, Canada.

“The Hard Way” tells the story of Hayes, who runs 30 races each year, cuts his firewood by hand and does things the hard way to remain active and alive. The film takes viewers on a journey that’s about more than running. It teaches them to live life with purpose and momentum. Montana independent filmmakers Jeremy Lurgio, a University of Montana associate professor of photojournalism and multimedia storytelling, and Erik Petersen, of Clyde Park, spent more than a year documenting Hayes’ story about remaining active and vital as he approaches 90.

“He lives an authentic, inspirational life, and we were lucky enough to document that,” said Petersen, who attended the festival with Lurgio. “Being selected as a finalist to Banff is just icing on the cake.”

“Bob lives the way many of us hope to in our later years,” Lurgio said. “He has a nice balance of hard work, running and being active in the community. He still contra dances. He goes to the library and continues to learn all the time. It’s just really inspiring.”

Founded in 1914, UM’s School of Journalism is now in its second century of preparing students to think critically, to act ethically and to communicate effectively. The school recently was named as one of the top 10 journalism programs in the country by the Radio Television Digital News Association. Visit http://jour.umt.edu/ for more information.