A New Gun for Bond? (with Colonel Smoothbore)
By angelamontana

It seems that there is no end to announcements introducing new guns. This has been especially apparent with new handguns entering the market, and for gun folks this is a great time to be in need of a pistol. Choices are nearly endless. Recently, both Remington™ and Walther™ introduced new and interesting pistols. Here’s a quick look.

Remington™ got back into the handgun market a few years back with their R11 M1911 guns. Earlier this year they introduced a nice .380 ACP pistol, the RM380. After the disastrous debut of the production R51 9MM Lugar model and its subsequent recall a few years ago, Big Green is once again offering a redesigned and revised R51 to the public. It’s a nicely designed gun, let’s hope it works this time. The latest offering from

Remington™ came just this last September. The RP9 and RP45 striker fired polymer pistols will hit the market soon. These guns were kept on ice after the R51 fiasco, but with the R51 reintroduction, Remington™ decided that now was the time to bring the new pistols to market.

The RP series has two models, one in 9MM Lugar and a .45ACP gun. There evidently will be no .40 S&W chambering as sales of that caliber are off across the board. The new guns were greatly influenced by Leland Nichols, formerly of Smith & Wesson™, and one can easily see the resemblance to the M&P® series of pistols. These are duty-sized guns with 4.5 inch barrels, drift adjustable rear sights, a picatinny rail on the dust cover, interchangeable backstraps, reversible magazine releases, and PVD coated slides and barrels. The double s 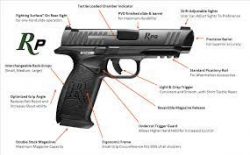 tack magazines hold 18 rounds in 9MM and a whopping 15 rounds of .45ACP. Both guns weigh a bit over 26 ounces empty. Like the M&P®, the RP guns have a low bore axis and Remington™ claims a grip size that should fit 95% of shooters. MSRP is about $ 500 with the street price expected around $450, and the guns should be on dealer’s shelves very soon. All in all a promising future in this market for Remington™.

Another new pistol comes from the German firm Walther™. Walther™ wanted a less expensive polymer handgun to compete in the mid-range market segment. They appeared to have succeeded. The Creed has a 4 inch barrel, picatinny rail, 6.5 pound trigger pull with a .3 inch reset, and one of the most ergonomic grips of
any pistol around. The Creed pistols sport 3 dot sights, have magazine capacities of 10 and 16 rounds, and weigh about 27 ounces. They chambered only in 9MM Lugar. MSRP is $ 399

and as the guns become more available, I would expect street prices in the low to mid $ 300 range. Walther™ produces some of the most comfortable, hand-fitting handguns available and now it has one for the masses. We’ll have to wait for the next Bond film to see if James trades his PPK for a new “Creed.” 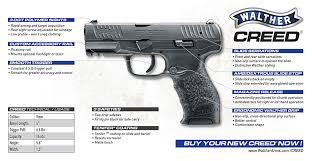