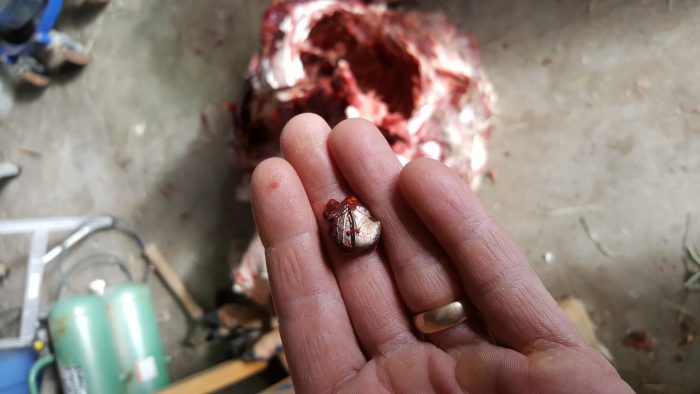 What’s Your Bullet Telling You?
By Toby Trigger

A hunter  was quartering up an elk recently and found two bullets in the shoulder.  The two bullets had lost  most of their weight upon impact.

Imagine the hunter with a bull in his (or her) scope.  Heart pounding excitement, nerves calmed, a slow  steady pull of the trigger – BOOM! Then another BOOM!   The hunter is sure the bull was hit.  Hours later – nothing.

The hunter who put two shots in the shoulder probably went home and made sure the gun was sighted in.  Probably  took some heat for missing and still feels bad.

Well, atleast that hunter saved money on ammo.  The place to save money on your hunt is NOT on ammunition.  Buy a bullet that has good weight retention.  I’m not here to advocate for one bullet over another, but a Nosler (R) Accubond (available at Bob Wards) is an example of a bullet that mushrooms but maintains enough  weight to keep driving through heavy bone.

The one pictured here went through the front shoulder of a buck recently.  It broke the leg on a quartering forward shot and was stopped against the hide on the opposite side.  The bullet was extracted when the deer was skinned.

That is what a bullet is supposed to do. If your bullet isn’t doing this  – you are risking a story like the elk hunter at the beginning of this story.

What’s your bullet telling you? Or maybe a better question is, What kind of story are you telling BECAUSE of your bullet?