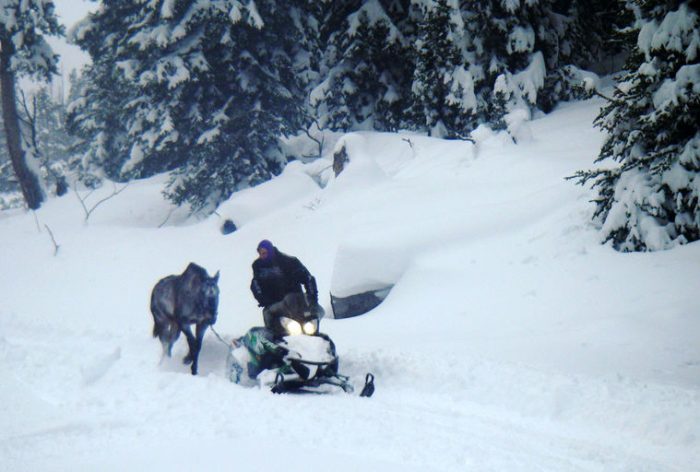 A horse was rescued after spending six weeks alone and was found semi-buried in deep snow in a Wyoming forest notoriously thick with wolves.  Here is what Melissa Cassutt with the Jackson Hole News & Guide reported:

She was first seen mid-December, when a trail groomer was working to clear trees and pack down snow.

He knew immediately she was out of place alone in the Bridger-Teton National Forest, lost at the lower end of Fish Creek Trail.

The dark-coated mare stood out against a blanket of white snow. She was gaunt and had been pawing down the drifts, nibbling at what grass she could find.

The groomer contacted the Shoshone National Forest’s Wind River ranger station in Dubois that day, Dec. 14, and U.S. Forest Service Law Enforcement Officer Dirk Chalfant heard about it the next morning. He got on the horn and soon found out the horse belonged an outfitter who’d led pack trips in the area over the fall.

“What I discovered is this horse had probably been in there for six weeks, and at a least three of those six weeks it was probably in about 5 feet of snow,” Chalfant said, “and occasionally 30 below zero.”

Six-year-old Valentine had been left in the forest at the end of a hunting trip, having fallen too ill to pack out, said BJ Hill, owner and operator of Swift Creek Outfitters and Teton Horseback Adventures.

Click HERE to read the rest of the article.

That is one tough horse who was very lucky to be alive and rescued!