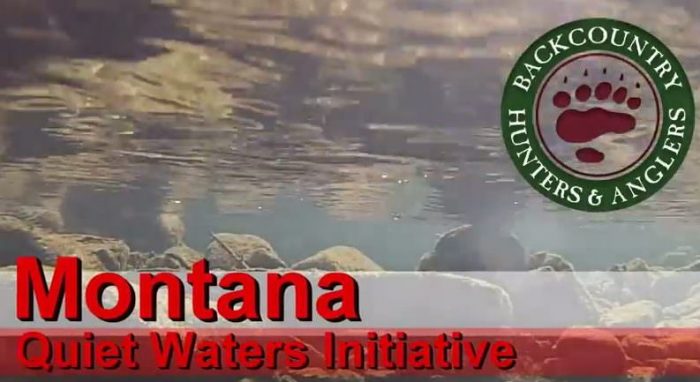 Dale Gilbert from http://www.montanawalleye.com/ sent his “Two Cents” worth on the Quiet Waters Initiative (below).   Montanaoutdoor.com welcomes opinions on the Quiet Waters Initiative.
You have until February 12th to comment through FWP.  Written data, views or arguments may also be submitted no later than Feb. 12 to: Department of Fish, Wildlife and Parks, Attn: Quiet Waters Petition, P.O. Box 200701, Helena, Montana, 59620-0701; visit fwp.mt.gov; or e-mail QuietWaters@mt.gov.
Here is info and some of the comments from public meetings held in Eastern Montana:

Concerned recreationists gathered in three Montana communities Monday night to listen and comment on the Quiet Waters Initiative, a new set of rules for various state waterways proposed by the Backcountry Hunters & Anglers.

In Miles City, 10 people listened to the Billings-based meeting by videoconference at the Fish, Wildlife & Parks Region 7 headquarters. In Glasgow’s Region 6, one person showed up to comment, and Billings’ Region 5 drew more than 100 audience members.

The initiative addresses the types of watercrafts and activities allowed on various Montana waterways. To read the full proposal or comment, visit http://fwp.mt.gov and click on Quiet Waters Proposed Rules on the home page.

At Monday’s hearings, many people commented that the proposal serves only fishing guides, while decreasing access to other users. Detractors also noted that it includes too many waterways and stipulations, isn’t backed by science, pits sportsmen’s groups against one another, lacks common sense and adds unnecessary regulations.

Mike Penfold of Backcountry Hunters & Anglers said he’s enjoyed many good days on the state’s waters, but he is concerned by new technology that allows motorized crafts to go where they couldn’t before.

Because of the amount of input being received, FWP opted to extend the public comment deadline to Sunday, Feb. 12. The decision to initiate rulemaking on the petition and seek comment was made by the Montana Fish & Wildlife Commission during its May meeting. Comments will be reviewed, and the commission will revisit the proposal in a later meeting.

Some rules for river usage would remain the same under the proposal, but recommendations on some waterways include:

Most of the Miles City spectators were members of the area Walleyes Unlimited chapter. Eastern Montana recreationists are concerned that such efforts will expand to waters in their area.

Walleyes Unlimited member Duncan Bartholomew called the proposal “a further restriction on anglers, restricting our God-given right to use these waters.”

“Where will this end?” he asked. “Will it stop in the Tongue River, below Fort Peck?”

Now that you have more of an idea of what exactly is going on with the Quiet Waters Iniative and what is being proposed, take a look at Dale Gilbert’s comments here:

Comments in opposition to the proposed Quiet Waters Initiative Petition by Dale Gilbert.

Montana Backcountry Hunters and Anglers submitted a Quiet Waters Initiative and Petition to the FWP Commission at their May 12, 2016 meeting with recommendations to drastically restrict access and uses of our waterways in Montana.

The basic claims of the petitioners is that these restrictions are needed and if not implemented will  invite user conflicts, unsafe and highly risky conditions, and can damage fish and wildlife habitats.

At the FWP Commission meeting the Rebecca Doctor, FWP Chief Legal Council advised that if adopted, this request would be processed under the administrative rules regarding river recreation management and would require, environmental assessment, developing a Citizens Advisory Committee, development and implementation of the plan.   She went on to state that the Backcountry petition “presents recommendations to drastically restrict waterways without demonstrating any necessity to protect public health, public safety, public welfare or to protect public property or public resources.

In addition the head of the FWP Enforcement division Tom Flowers advised The  FWP Commission that the FWP Department had queried regions to see if there was an issue, and all answered there was not an issue .  “The Departments stance is that the petition is unwarranted at this time.”

Bottom line the FWP staff recommended “Using the guidance and requirements established by statute and rule, the commission should deny the petition.”

Disregarding the information presented by the FWP Department staff Commissioner Tourtlotte made the motion to approve which was seconded by Dan Vermillion.  And it was approved.

So the first concern is why …. When the Department has gone on record that there is not an issue does the Commission want to have so much time and money spent on something that is not needed?

Secondly, there are already numerous laws and rules in effect to address issues with  boating safety and conflicts…..why do we need more?

Third, after a review of the Quiet Water Initiative dated March 2016 prepared for the Montana Backcountry Hunters and Anglers I am very disappointed to see multiple statements and assumptions that are not supported and would tend to misinform or misrepresent what the situations are.

Fourth, beyond the fact that many statements appear to be very misleading,  what I also see is a very deliberate attempt by a special interest group to limit the use of many of the state’s resources to an elite group and specifically removing options for many users – specifically children, disabled veterans, and senior citizens who do not have the physical ability to hike or wade.  Some would argue then they could use a drift boat or raft, but that again complicates things with needing shuttle vehicles or rides or hiring outfitters or guides and is something some people can just not do.

It appears to me that this initiative is from an extremists point of view – literally “crying wolf” without facts to support their claims..

In essence the claims made in this petition would lead the uninformed or less knowledgeable that eliminating or restricting jet boat use and implementing a 10 hp motor restriction  will protect the resources better.   Frankly, there is nothing to support this claim.  I believe a jet boat on plane causes much less disruption or damage than a 10 hp propellor boat in shallow water – bottom and shoreline both.   And frankly drift boats throwing out and dragging an anchor probably does more harm than both.  And I have a hard time believing anglers wading through spawning beds don’t also cause disruption or damage.  So why are you just picking on the jet boat users?

Specific examples of misrepresentation or exaggeration in their Petition and initiative  follows:

I have no idea where this idea comes from.  I attend multiple boat and sport shows a year here in Montana and I have not seen anything close to a new or different type of watercraft introduced every year.   This is an exaggeration of fact and not supported…just an example of the flagrant misrepresentation and efforts to mislead the uninformed.

Again this not supported by facts.   There are already Boating laws in place to help to mitigate conflicts and provide for safety.   And I have never seen any evidence that a jet boat has caused the fishery or habitat any more damage than other craft or users..   I would argue a jet boat causes less disruption and damage than other users.

In fact, there are already Montana Boating Laws in effect that address the conflict and safety issues.

MCA 23-2-523 Prohibited operation….a person may not operate a motorboat….or similar device or other contrivance….in a reckless or negligent manner…to endanger life, limb, or property…

MCA 23-2-526 Overloading—overpowering…says No vessel shall be equipped….beyond its safe power capacity……and goes on with noise restrictions that if exceeded are considered a public nuisance and disorderly conduct.

“Do not operate a boat within 75 feet of a person engaged in fishing or hunting waterfowl unless it is unavoidable.  If unavoidable travel at no wake speed or at the minimum speed necessary to maintain upstream progress.”

Even looking beyond the basic commonsense approach to this petition I also spent some time reviewing ARM 12.11 Rules regarding River Recreation Management as follows:

In addition to the laws already in place, you also have ARM Rule 12.11.405 Policy Statement Concerning River Recreational Rules.

“(2) The purpose of these rules is to provide guidance to the commission, the department, and Department appointed citizen advisory committees in the management of recreation on rivers.”  That goes on to state….”theses rules seek to promote management of the river recreation that provides a full variety of quality recreation for a diverse public and protects natural resources in rivers and adjacent uplands.”

(3) The general premise of these rules is that the public prefers to recreate on rivers without controls on their recreational experience…..”.  This part also goes on and states:

“Educating the public about river recreation issues can lead to modified behavior on rivers and the department can use education as a nonregulatory method to address social problems on rivers.”

So why isn’t this ARM rule being implemented vs. a whole bunch of new laws and restrictions?

So from what I have read this proposal is in direct conflict with the existing ARM for river recreation management.   No environmental assessment has been done that I am aware of.  No Citizens Advisory Committees have been set up, etc.

And frankly given the statewide scope of the waters identified in this proposal,  I would think separate Citizens Advisory Committees would have to be set up in each region affected at the very least.

Considering the laws and rules already in place I would object as a taxpayer to see any money spent on such a project when we have limited budgets and what I believe the department would consider…higher priorities and problems to deal with.   Adopting this petition would require a whole lot of time, money, manpower etc. that could have been used by the Department for enforcement and other priorities as they deemed prudent.

What I see here is the attempt for a small special interest group to set a side and reserve for their own private use a lot of the public resources that are supposed to be accessible to all.

So, I can not see any reason what so ever to implement the Quiet Water Initiative….in fact this

seems totally unnecessary and in direct conflict with what already exists.

If the FWP Commission really felt public safety is an issue, then it would probably make more sense to make it illegal for anyone to wade in these rivers, because there have been more incidents of people who have apparently fell or slipped and drowned than from any other types of users on these rivers.  In fact, I also believe there have been more deaths from drowning from floaters than from any jet boat incidents.   So if the goal is safety or reducing conflicts there are other areas to consider that would accomplish more.

And furthermore, I am strongly opposed to actions being taken by Commission members who would appear to have a conflict of interest via how this affects their own business or job.

Is it right to have people on the FWP Commission taking actions to approve petitions from groups that they have given multiple grant awards over the past two years.  Commissioner Wolfe is the Executive Director of the Cinnabar Foundation who has awarded multiple grants to the Backcountry Hunters and Anglers and Trout Unlimited over the last two years.

And I believe the Chairman of the Commission Dan Vermillion is an owner maybe co-owner of the Sweetwater Travel Company who specializes in setting up guided fly fishing trips on Montana Rivers.   Restricting other users …. and eliminating other competition so children, disabled, or seniors that can’t wade have to hire an Outfitter or guide with a drift boat is not right.

I am opposed to these proposed rules being implemented in any part.