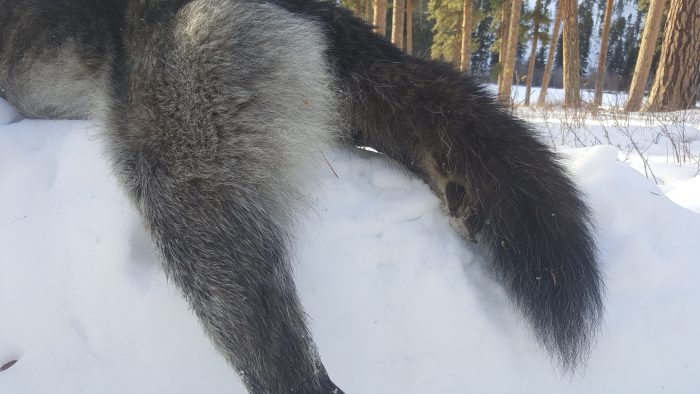 Wolf hunters and trappers develop a desire for a certain color phase or size of their quarry much like bear hunters do.

Bears come in colors with names like blonde, black, chocolate and cinnamon. Wolves though have so many shades of black, silver and gray all over that it’s sometimes tough to know what “phase” to call them.  But unlike bears, wolves may change color over time.

Recently while presenting a wolf hide to FWP Rebecca Mowry, a biologist from Montana’s  Region 2, explained that as black wolves get older they begin to turn gray and in some cases  eventually take on a white appearance.  Mowry has witnessed entire packs of wolves turn white in captivity.

The wolf I was checking in had black across its back with silver highlights.  The underbelly fades to dark gray.  This wolf is an old female weighing in at 92 pounds and I could have reported it as gray or black.

I chose to report it as black especially after learning that this wolf was probably in a transition phase.

What color would you call this?