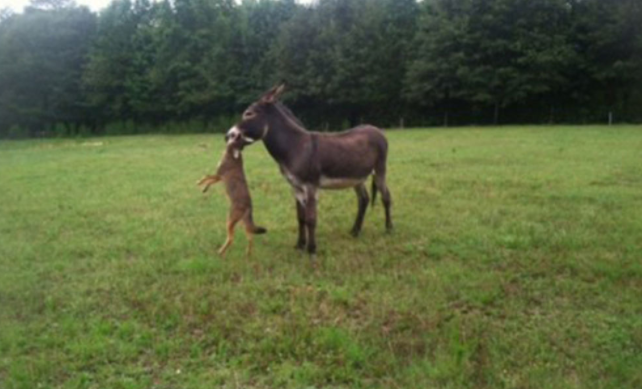 Donkey’s Can Hold Their Own
By rowdyrob

In South Carolina, coyotes can be a big problem when it comes to livestock.  However, some livestock won’t just roll over and die when confronted with a coyote.  Buck is a male donkey seen pictured above.  Buck used to share his are with a female donkey who recently moved to another pasture.  Once there was only one donkey in the area, a local coyote starting lurking around, thinking there was easy prey.  Well, he was wrong.  Steve Hipps is the owner of the property and was made aware of the coyote’s presence one day by his neighboring cousin.  When Hipps went to check on his livestock, Buck was seen kicking and stomping the coyote to death.  Once the coyote was down, Buck reached down, picked up the coyote by the neck and started slinging him around.  Moral of the story, don’t bite off more than you can chew!