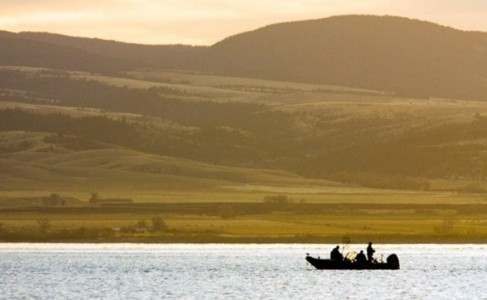 The Joint Montana Mussel Response Implementation Team today announced that watercraft inspectors will be at the Silos boat launch north of Townsend on Canyon Ferry Reservoir beginning this weekend.

With spring-like temperatures forecast to soar near 70 degrees on Saturday, Montana Fish, Wildlife & Parks will set up Canyon Ferry’s first watercraft inspection and decontamination station of the season.

“Walleye and trout anglers who anxiously await Canyon Ferry Reservoir’s ice off are among the most dedicated and knowledgeable in Montana,” said Eileen Ryce, chief of FWP’s Fisheries Division. “We want to be there to explain what we’ll all need to do to ensure that we’ll have these same fishing opportunities in the future.”

The inspection station will be in operation 10 a.m.–8 p.m. at the Silos. Surface ice on the southern end of the Canyon Ferry Reservoir is slowly receding, which annually invites shore and boating anglers to the open water. Because much of the lake is still ice covered few boats are expected to launch this weekend.

In October 2016, Montana’s first-ever detection of invasive aquatic mussel larvae showed up in Tiber Reservoir – and “suspect” detections turned up in Canyon Ferry Reservoir. The discovery triggered a natural resource emergency in Montana and led to several recommended strategies to manage the threat of invasive mussels spreading to other areas.

“These early-season anglers and boaters can help lead the way toward showing others that all Montanans need to cooperate in Montana’s expanded watercraft inspection effort,” Ryce said. “FWP will be there to help, but it’s everyone’s responsibility to stop the spread of invasive mussels and other aquatic invasive species to other Montana waters.”

Tiber and Canyon Ferry reservoirs were closed temporarily last fall under emergency restrictions on the launch or removal of all boats, docks and other structures. Precautions taken to impede the spread of invasive mussels were lifted in January when a layer of winter ice formed atop the reservoirs.

Winter and early spring is a low-risk season for transmitting mussels from one waterbody to another because zebra and quagga mussels don’t reproduce when water temperatures drop below 48 degrees, Ryce said.

“This weekend, FWP will greet and share information with Canyon Ferry boaters,” Ryce explained. “It will be our first chance to interact directly with them since the suspected invasive mussel detection last October. We hope the boaters and anglers will let us know about how they feel about the serious threat invasive mussels pose and that they’re ready to join the battle to contain them.”

Invasive mussels and other aquatic invasive species are easily transported via water in boats or bait buckets. “We all need to get in the do-it-yourself inspection habit,” she said. “If we just clean, drain and dry our boats and equipment after every outing on the water, we’ll guarantee that we’re not transporting mussels.”