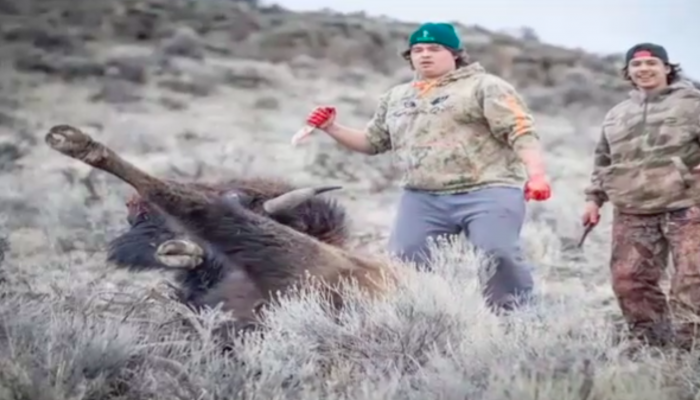 The Nez Perce are an Idaho tribe with treaty rights in Montana.  Stories of waste, road shooting, treating bison with disrespect are going around the Gardiner area and have been brought to the attention of the Montana FWP.  As seen in the pictures taken by the Buffalo Field Campaign, Nez Perce hunters are stabbing a bison that was shot but not killed.  A different case occurred in the same area where seven bison were shot by Nez Perce hunters, but five survived and had to be put down by state officials and all were left to waste by the hunters.  FWP and residents of Gardiner are also concerned about the amount of elk that are being killed during this time of year as well.  Some have described killing elk in the area as a “Roadside Slaughter”.  Officials have tried to contact the Nez Perce tribe to change their practices so they hunt elk and and bison earlier in the winter when they aren’t so week and vulnerable.  Nothing has changed in these practices so far.
Read the full KPAX story and see more pictures here