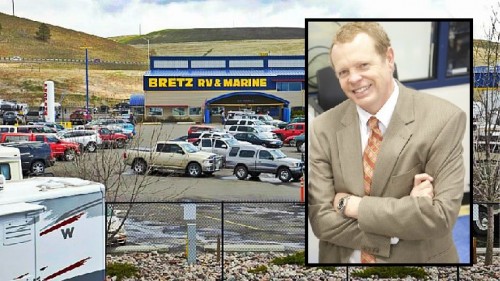 We are proud to announce that Mark Bretz, with Bretz RV & Marine, has been selected as the 2017 Montana State Small Business Person of the Year!  Bretz RV & Marine is a sponsor of the Montana Outdoor Radio Show, and we are thrilled to hear of this latest news!  A big congratulations to Mark from the MORS crew!  Make sure you visit bretzrv.com and head over to your nearest Bretz RV & Marine dealership to see why Mark was specifically selected!

Check out this article from PRWEB.com:

Mark Bretz of Missoula, Montana, has been selected by the U.S Small Business Administration as the 2017 Montana State Small Business Person of the Year. This is a special award given out to individuals who demonstrate hard work, innovative ideas and dedication to their employees and community and who play a driving role in stimulating the state and national economy. His company, Bretz RV & Marine, is celebrating its 50th anniversary during the 2017 year.

Bretz RV & Marine first started in 1967 when Mark’s parents, Frank and Vi Bretz, bought some Aloha Trailers and began renting them at their small service station in Missoula. Mark and his brother Dave successfully grew the company into four dealerships in Missoula, Billings and Boise with over 330 year-round and seasonal employees.

In addition to their operations, Bretz RV & Marine is known for their active presence in the Missoula community. They frequently partner with outdoor retail stores such as Cabela’s and Bob Ward’s and sponsor local events such as Big Sky Film Festival, Downtown Tonight and Garden City River Rod Run. Each year, the dealership supports various groups such as high school athletic teams, local law enforcement and non-profit organizations throughout Montana, as a way to acknowledge the importance of giving back to the community.

During a special ceremony held the week of May 1st, the President will issue a proclamation that celebrates the state winners in the nation’s capital. This has been an annual tradition since 1963 when President John F. Kennedy signed the first proclamation declaring National Small Business Week. It is a way to celebrate America’s entrepreneurial spirit and recognize the crucial role that small businesses have in contributing to economic growth by creating new private sector jobs within their communities.

Congratulations to Mark Bretz and Bretz RV & Marine on receiving this exceptional award in 2017.